MEMBER OF GUN LOBBY DEFENDS GUN LAWS OR: A STUDY IN SHEER EXASPERATION 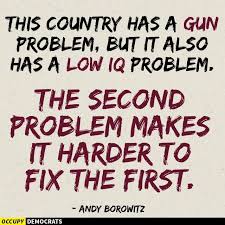 A member of the gun lobby who asked to remain anonymous spoke to our Barking in the Dark reporter today about the latest mass killings in Orlando Florida.

Our Reporter: “In light of this latest tragedy do you still defend the N.R.A.’s continued blockage of more stringent gun laws – especially as they pertain to assault rifles?”

Our Reporter: “You say that quite matter-of-factly.”

Gun Lobbyist:  “How else should I say it?”

O.R. “Even though fifty innocent people were shot and killed and fifty-three others wounded?”

G.L.  “Perhaps the good Lord thought it was their time.”

G.L.  “Speaking as a Christian we know He does work in mysterious ways.”

O.R. “Do you think this could have happened if this killer wasn’t armed? If he didn’t have an assault rifle?”

G.L.  “The second amendment to The Constitution of these United States of America gives him, and everyone else that right. The right to bear arms.”

G.L.  “What – you’re going to tell me that the second amendment only pertains to a well-regulated militia?”

G.L. “Are you suggesting we take away this God given right to bear arms?”

G.L. “And thus begins the slippery slope towards taking away my God given right to protect myself and my family from an armed intruder.”

O.R. “But if guns were banned completely wouldn’t the odds of that happening be lessened considerably? And, again I ask you; do you think that someone on the terrorist watch list should have been able to legally purchase an AR-15-style semi-automatic rifle and a 9mm handgun?”

G.L. “But if you take away his right to own a gun then you can take away my right also. Just because he’s a so-called terrorist he still has a second amendment right – doesn’t he? It’s the same as all these bleeding heart Liberals who want to legalize abortions. And, if you make an exception in the case of a woman who’s been raped by her father or an uncle or like that and she doesn’t want the baby then it’s that same slippery slope and then every woman will want an abortion just because she can.”

O.R. “Then you believe that a woman who’s been raped by a relative should still have that baby.”

G.L. “Of course. It’s her duty as a Christian. Also, I’d like to point out that the Bible has much to say about weapons. The word “sword” appears in over 400 verses in the Old and New Testaments. And Jesus Himself upheld the right of His disciples to carry a weapon. The right to keep and bear arms is not only a basic American right. It is a right given by God in this sinful world. It is assumed in the Bible.”

O.R. “Even if in only 165 days so far in 2016 there have been 133 mass shootings and 207 innocent people slaughtered? And don’t the Ten Commandments include one that says thou shall not kill?”

G.L. “Which is why abortion in all cases should be illegal.”

O.R. “And selling guns to someone on the terrorist watch list shouldn’t be illegal?”

O.R. “I see…Let’s get back to that well-regulated militia that gun rights advocates always use to defend their ownership of handguns and assault rifles. The word militia as defined in The American Heritage® Dictionary of the English Language, Fourth Edition, refers to “an army or other fighting force that is composed of non-professional fighters; citizens of a nation or subjects of a state or government that can be called upon to enter a combat situation.” Do you believe that all these mass murderers are members of such a militia? Are most people these days who purchase a gun members of an army or fighting force?”

O.R. “Why do you believe it’s necessary for someone to possess an assault rifle?”

G.L.  “As I said before; to protect oneself and family from a home invasion.”

O.R.  “Why wouldn’t a handgun be enough to defend against a home invasion?”

O.R.  “You need an assault rifle to bring down a deer?”

O.R.  “Ok…I think we should wrap this up. So, as I see it, your position is that someone on the terrorist watch list should be able to legally purchase an assault rifle such as the one used in Pulse in Orlando.”

O.R.  “And a woman raped and impregnated by her father must have the baby?”

G.L.  “That’s correct, and as it should be. Abortion is against God’s law – and ours. And, I may add, homosexuality is an abomination in the eyes of God.”

O.R. “So the people who were slaughtered in Orlando…what?”

O.R. “Ah…I see…One last thing; would you be comfortable if someone on the terrorist watch list was allowed to board a domestic flight that you were on?”

O.R. “But the same person should be able to legally purchase an assault rifle.”

G.L. “The second amendment says they can. Case closed. I have to go to a meeting.”

O.R. “It was interesting speaking with you. Very revealing. Barking in the Dark thanks you.” 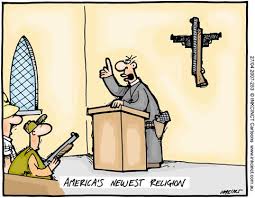 Tony Powers is a writer/actor/musician. His full bio may be seen by clicking on the picture, and then clicking on either of the 2 boxes below it.
View all posts by barkinginthedark »
« TRUMP OUTRAGED BY LATEST MASS SHOOTING
WHY I DESPISE THE REPUBLICAN PARTY »

6 thoughts on “MEMBER OF GUN LOBBY DEFENDS GUN LAWS OR: A STUDY IN SHEER EXASPERATION”