NEW YORK – An anonymous source close to the Trump organization has told Barking in the Dark that Donald Trump is “seething with anger” at the news out of Orlando Florida that a mass shooting of unprecedented violence has taken his name and face off of the front pages of newspapers and TV news networks.

Said the source; “He is feverishly planning ways to regain the headlines and TV coverage beginning with an all-out assault on President Obama and Hillary Clinton.” The source added: “Mr. Trump will blame them for this tragedy, though he did not use the word “tragedy,” but rather “lousy fucking break,” and will use this event to double down on his proposal to ban all Muslims from living in this country.”

Reportedly, when an aide suggested to Trump that this might be a good time to demand a ban on assault rifles Trump replied; “Really? And what do suppose my sons Don Jr. and Eric would use to kill some more of those dumb elephants?

Trump reportedly was “furious” at the timing of this mass killing that took place in, as he put it, “this craphole of prancing queers in Orlando who won’t be missed.” The source added; “However, he is planning a speech eulogizing the people killed and offering his “heartfelt condolences” to their families saying; “This will get huge headlines and put me back on the front page where I belong.” 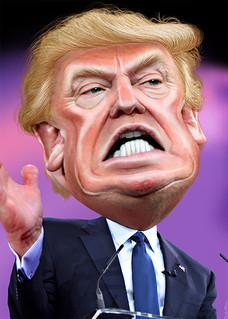 Tony Powers is a writer/actor/musician. His full bio may be seen by clicking on the picture, and then clicking on either of the 2 boxes below it.
View all posts by barkinginthedark »
« WHEN NAZI DON SPEAKS…
MEMBER OF GUN LOBBY DEFENDS GUN LAWS OR: A STUDY IN SHEER EXASPERATION »