LET US BE CLEER

The other day Donald Trump stood before an assembled crowd in Gettysburg Pa and referred to Gettysburg as this “hollowed” ground. Hollowed! Did he mean that the ground beneath them was empty? And, no one – no one in the pundit class picked up on this statement of revelatory ignorance.

I guess I have been on a language mini- crusade ever since Donald, attempting to pander to the rabidly patriotic bent of his base (America, right or wrong), noted that Gettysburg was “hollowed” ground – thus revealing yet again his vast wealth – of ignorance and illiteracy.

So – in the face of his possible upcoming staggering defeat at the polls this November there is this; I keep hearing Republican spokespersons and elected officials on TV delivering variations on; “we Republicans need to do more to appeal to ethnically diverse voters…etc etc.

Notice – they say they need to do more to appeal to these voters…not that they need to do more for these voters. The former sentence, in essence, means we need to rattle off some more empty rhetoric filled with a lot of phony promises that will never be acted upon, and the latter sentence means we will actually do something for people. Therein lies the time honored Republican agenda re: working people; more bullshit, little – or no – action.

And, no one – no one – ever calls them on this verbal voodoo. Words matter. They matter – and, if we know how to hear beneath the lines we can hear the subconscious text screaming at us. THIS IS WHAT I REALLY MEAN! WHAT I AM! WHO I AM! HOW INTELLIGENT, OR STUPID, I AM!

A certain TV sports color commentator who happens to be the color analyst of my favorite pro basketball team says, whenever the action gets fast and furious, that the pace is “vacillating.” He has been saying this for at least the past four seasons, completely unaware that what he is saying is the polar opposite of what he means. And again, obviously no one – and, again I repeat, no one, has ever taken him aside and quietly and respectfully made him aware of this. Do they also not know the meaning of “vacillate“?

The other day someone was quoted in the New York Times as saying; “Abuse takes many forms and is not a gray area.” Does this sentence not completely contradict itself? People now say “heighth” when they mean height, “eck cetera” when they mean et cetera, and this is because they either no longer read, or cannot read. If they could read, or if they weren’t lazy readers, they could see as plain as day that the ending of the word height is “ht” not “th,” and, as far as “eck cetera” is concerned it is obvious that they have never seen this adverb written.

Granted these are just some very minor examples of what we can hear every day from TV pundits and commentators et al. But this abuse and misuse of our language tells me that by and large we are gradually being systematically dumbed down. And, loudly cheering on this development – pom poms and all – is the Republican Party, whose bread has always been lavishly buttered by ignorance. You may say; Republicans are responsible for a lot of bad stuff but blaming them for our population’s diminished brain power is taking it a bit too far. Oh, is it? Let’s see.

The conservative wave of 2010 allowed Republicans to implement slash-and-burn governance in several states – what Kansas Governor Sam Brownback called a “real live experiment” in tax cuts for corporate interests and cuts to services for everyone else. One of the most devastating casualties was public schools and universities. Koch-supported Wisconsin Governor Scott Walker is proposing a whopping $300 million in cuts to the state university system – while simultaneously proposing $200 million in public bonds to finance a new stadium for the Milwaukee Bucks. Republican Governor Terry Branstad of Iowa resorted to a sleight of hand approach. He cut education funding by so much it will leave 80% of the state’s schools without adequate funding for operations. In Philadelphia, a city in the midst of a massive shift to charter schools after a takeover of the school system ordered by then Governor Mark Schweiker (GOP), charter schools today are overfunded while the remaining public schools go wanting. And, the ex-Governor of Pennsylvania, Republican Tom Corbett, reduced public school funding by $900 million, or 10 percent, in 2011.

Moreover, Republicans have blocked every effort since the stimulus to provide student loan relief, and to rehire 400,000 teachers – included in the Teachers and First Responders Back to Work to Work Act which the Republicans blocked in The Senate, and which, as a digression, included a provision to create hundreds of thousands of jobs by repairing the nation’s bridges, roads and other vital sectors of the infrastructure. Moreover, the 32 Tea Party Republicans who caused the Government shutdown of 2013 caused as many as 19,000 children to lose access to The Head Start Program, which provides comprehensive education, nutritious meals, and medical screenings to low-income children. Add to all this the ongoing Republican attack on the teacher’s union – an attack on the very profession of education.

Do we detect a pattern here? Just google “Republican’s attack or war on education.” Read it and weep.

As a result, more and more of us are exhibiting the effects of this Republican-led assault on education. Thus more and more people – many of them TV pundits – misuse our language every day. Also, using computers with built-in spell check doesn’t help – it just compounds the ignorance and simply means no one needs to learn how to spell anymore – or add – I might add.

I hesitate to get to far into how appalling I find the continual usage of the word “incredible.” Synonyms for this word include; beyond belief, hard to believe, unconvincing, far-fetched, implausible, improbable, highly unlikely,dubious, doubtful, so extraordinary as to seem impossible, and, (most obviously) not credible. Yet, somehow this word has come to mean something good!? Why, you may ask…and the answer is the paucity of our linguistic skills due to our gradual dumbing down.

It is not my intent to demean these speakers. Rather, I am blaming this lack of linguistic skill on the decade’s long Republican-led assault on education. When the Republican candidate for President, Donald Trump, says “we love the poorly educated,” he is unwittingly revealing the Republican game plan for retaining power. Keep us dumb – and getting dumber – and we will be incapable of connecting the dots to why “things” aren’t as good as they can be – and all these “dots” invariably lead back to the Republican Party and their actions, and desire, to lower our collective IQ’s. If people were smart enough to be able to connect the dots they would know who their anger should really be directed at. They would reason who it was that gave us an illegal 3 trillion plus dollar war that plunged us into a recession and cost us some 8.8 million jobs? Who busted all our unions? Who consistently fights against raising the minimum wage?

And, to anybody who is of the glib opinion that both parties are the same, that they are both controlled by “big” money, well – one party’s “big” money is pro Social Security, Medicaid, food stamps, public safety services and emergency services, and the other’s is the Koch Brothers, among the largest polluters in the country, and their ilk such as media polluter and Republican propagandist Rupert Murdoch.

Moreover, one party – the Republican Party, now besides being the party hell-bent on destroying our educational system, is the party that has made it law in 14 states which will have new voting restrictions in place for the first time in a presidential election. The new laws range from strict photo ID requirements to early voting cutbacks to registration restrictions. Laws that impact most on the poorest among us, thus disenfranchising a large segment of our voting public – mostly Democratic. So, no…the two parties are far from being alike. These new voting laws, plus dumbing us down by cutting funding for education wherever they can, are parts of the Republican blueprint for holding onto power by their old, cold, white, shriveled claws.

So…whenever you hear someone who appears to be bright but who misuses our language, understand that in this seemingly innocent misuse there is a connection to why a Donald Trump can appear to many of us to be a viable candidate for the highest office in the land and that this happenstance is the result of decades of the Republican-led erosion of our educational system. 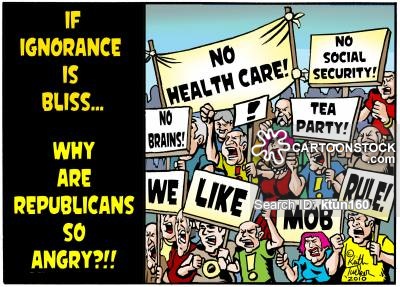 Tony Powers is a writer/actor/musician. His full bio may be seen by clicking on the picture, and then clicking on either of the 2 boxes below it.
View all posts by barkinginthedark »
« “No Problem” or: Hey Mister – Is That Your House That’s on Fire?
ANOTHER WORLD CLASS WHORE »

6 thoughts on “LET US BE CLEER”