The Republican Party has already made it quite clear that if Hillary Clinton is elected President they will not let her govern, they will not consider her Supreme Court appointee and they will, in fact, block any of her initiatives – and they will hold hearings with the expressed intention to impeach.

This is where we now find ourselves as a nation. So divided as to be broken. We can say that we have always been divided, except now we are divided in a way that we have never before experienced. Now we have the constituents of one political party so consumed by hatred that they will go along with their party’s vow to, in effect, tear up the Constitution. This hatred has been stoked by a cynical Republican Party so desperate to hold onto power at any, and all, cost that they are willing to inflame the fears of their base with unfounded rumor, lies and innuendo promoted by an eminently unqualified candidate who has both encouraged gun owners to do “something” if Hillary wins, and encouraged Moscow to hack our election – and, who embodies the very worst in us.

Furthermore, no matter what the outcome of this election may be this bell cannot be unrung. This country, its ability to govern and be governed by law, has now been so damaged by the Republican Party that it will take many decades for us to recover – if we ever do. This is a party ruled – as it has always been – by wealthy, unprincipled, ruthless, greedy old white men in the shadows who will do whatever it takes to keep their hold on the reins of power. And, fronting for them are some equally fearful uncaring puppets in state houses and Congress who, when they deign to govern, do so at the behest of large corporations, the Pentagon, the enemies of the environment and any regulation that will keep them from fleecing anyone but the very wealthy.

How jaw-droppingly amazing is it to hear the wife of the Republican candidate for president campaign for “civility.” This is the wife of the man who has constantly spewed racism, lies and insults towards Hillary Clinton, immigrants, women and anyone who disagrees with him, and has brought us to the this pinnacle of a culture of hate. This is a man who has threatened that we had better vote for him or else – saying that if Hillary Clinton is elected, “the work of government would grind to a halt if she were ever elected.” Pardon me while I laugh. As if the Republican Party ever governed for us, the people! What a fucking nerve this woman has to say that we need to be “civil” after the hatred her husband has stoked. Either she is as stupid as he is, or she thinks we are that stupid, or she lacks the gene for shame. Or, perhaps there is no word for “irony” in the Slovenian language. 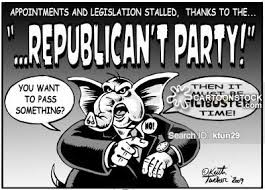 This is the party that shuts government down if they can’t get what they want. They did so in 1995 when the vile Newt Gingrich couldn’t get his way in trying to privatize Medicare, one of the Republican’s major goals. This is the party that, in 1997, gave us 10 days and 140 hours of congressional hearings on Bill and Hillary Clinton’s Christmas card list! The party that accused Hillary of killing Vince Foster! That accused Bill Clinton of being a drug smuggler!

This is the party who gave us Citizens United, allowing unlimited corporate money to control our elections. Citizens United’s stated mission is to restore the United States government to “citizens’ control.” How’s that for cynicism?

So, this sad state of affairs has been a long time in the making. Republican leaders have spent the past couple of decades doing exactly what Republican leaders are doing now: trashing democratic norms in pursuit of economic benefits for their donor class.

Of course, there were multiple real scandals during the administration of George W. Bush, ranging from what looked like a political purge in the Justice Department to the deceptions that led us into invading Iraq; nobody was ever held accountable.

And now cometh Mr. Comey, a man who has put his Republicanism before his duty as a public servant – and, we now learn that large factions in the FBI are Hillary haters. We also learn that the GOP spokesghoul Rudy Giuliani tipped Fox News days ago that this new Hillary email bombshell was coming. And, even if, as many believe, there is nothing incriminating in these emails the damage has been done. The Republicans have once again done what they have always done – resorted to anything but a legitimate proposal of governmental policy – to win an election.

Remember how George W. Bush beat Al Gore; hundreds of paid GOP operatives descended upon South Florida to protest the state’s recounts. The so-called “Brooks Brothers Brigade.” The demonstration turned violent, and according to the NY Times, “several people were trampled, punched or kicked when protesters tried to rush the doors outside the office of the Miami-Dade supervisor of elections. Sheriff’s deputies restored order.” DNC aide Luis Rosero was kicked and punched. Within two hours after the riot died down, the canvassing board unanimously voted to shut down the count, in part due to perceptions that the process wasn’t open or fair, and in part because the court-mandated deadline was impossible to meet. But mostly because Republicans refused, as per usual, to heed the wishes of we, the people.

And George W. Bush became President – and the rest is a sad history right up to the present.

I fear that as a country we are now permanently damaged. I blame the Republican Party for this. This party’s nomination for President is the head of a pus-filled boil that has been festering for decades, and even though he may lose this election the open wound both he, and the Republican Party, have left us with will not heal for a long, long time.

P.S. As of this writing; In the wake of the possibility of a Trump Presidency the stock market has had 9 straight days of losses. This is a first in more than 30 years.

Tony Powers is a writer/actor/musician. His full bio may be seen by clicking on the picture, and then clicking on either of the 2 boxes below it.
View all posts by barkinginthedark »
« JUST SAYIN’
THE SURPRISE PRESIDENT; DONALD J. TRUMP »

13 thoughts on “DESPICABLE; THE REPUBLICAN LEGACY”