THANKS A LOT ANTHONY!

If Supreme Court Justice Anthony M. Kennedy was such a beacon of “justice” he would have done the honorable thing and delayed his retirement until after the November 2018 election. The definition of “justice” is as follows; the quality of being just; righteousness, equitableness, or moral rightness: to uphold the justice of a cause. What he has decided to do BECAUSE OF URGING BY THE WHITE HOUSE AND THE REPUBLICANS is none of that. 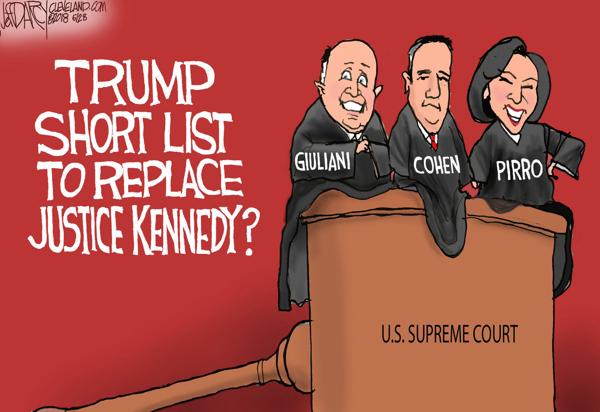 This election will decide how difficult or easy it will be for Republican’s to rubber stamp Donald Trump’s nominee for the Supreme Court bench. A lifetime appointment. And Trump’s only litmus test for this judgeship is repealing Roe v. Wade. In light of the Republican’s overt willingness to subvert the Constitution by denying President Barack Obama’s nominee to this court, Kennedy’s action is reprehensible. Why has he decided that he can’t wait a few months until after the November election to retire? By retiring before the election he is effectively denying the citizens of this country their right to self determination. Could he not wait just a few months until after November 6th to take this crucial step? How is this action which, in effect, will deny we, the people, our Constitutional right to speak through this upcoming most important election in our lifetime fair, just, equitable – or moral?

Justice Kennedy, who many are turning verbal somersaults of praise for, wrote the majority opinion for Citizens United, voted in favor of George W. Bush against Al Gore, voted to gut the Voting Rights Act, voted to in favor of upholding the Trump travel ban, voted against unions by allowing employers to prevent workers from banding together in class action suits, voted in favor of redistricting and, in effect, against reining in partisan gerrymandering, and voted in favor of a baker’s right to discriminate against gay couples.

Yes, he may have sided with the better angels on the court 51 times. Fair enough! Now when it counts more than ever he hands us this unthinking, untimely, unfair decision.

As a result, a con man, a grifter, a serial liar, a probable traitor, gets to nominate a Supreme Court Judge…Maybe even two! We can not let this happen! We are witnessing our country being stolen from us in a coup d’état by a wealth-backed, mostly white, very ignorant, very fearful Right-wing minority who will do anything to hold on to power – no matter the cost.

We must petition our representatives in Congress by phone, text, or email to make every effort to block this nomination. And we must succeed in this or our children and our children’s children will live in a country with more pollution, less regulations against banks and Corporations, more guns, fewer rights – especially for women and the LGBT community – more money in our elections, less voting rights, less civility, more travel restrictions, less funding for public schools, less available healthcare, a crumbling infrastructure, less worker’s rights, more privatization of public lands and water, isolation from the world community, more fracking and coal mining and less alternative energy, a possible end to Social Security…and more hate. This is what Trump and the Republicans are breeding. Money is their God…What befalls the rest of us does not matter to them. And if you think I am overstating the crisis we are now faced with I invite you to research the ascendance of any autocrat or dictatorship in history and the resulting damage to their people.

VOTE!  SPEAK OUT! WE MUST KICK REPUBLICANS OUT OF OFFICE!  VOTE!

WE STAND ON THE BRINK OF DESCENDING INTO A DICTATORSHIP!

Tony Powers is a writer/actor/musician. His full bio may be seen by clicking on the picture, and then clicking on either of the 2 boxes below it.
View all posts by barkinginthedark »
« WE HAVE NOW BECOME NAZI GERMANY
ONE PICTURE IS WORTH A THOUSAND WORDS! IN THIS CASE THREE MILLION WORDS »

8 thoughts on “THANKS A LOT ANTHONY!”