WHY MUST I REMAIN CIVIL?

It annoys the bloody hell out of me that we are told by so many of our level-headed liberal brethren that we must be civil in our political discourse with Trump’s base.

Let me get this straight: I am to be civil with people who unashamedly support the likes of Donald Trump, David Duke, Roy Moore, Paul Nehlen, Seth Grossman, Joe Arpaio, Russell Walker, Steve King, Arthur Jones, Corey Stewart, John Fitzgerald, David Vitter and the countless other Republican bigots? And with their MAGA-hatted fans who get hard — and wet — as they listen to the timeless message of fear and hate spewed out to them by the likes of Rush Limbaugh, Alex Jones, Sean Hannity, Laura Ingraham, Mark Levin, Dana Loesch and Ann Coulter to list but a few of the many racist uncaring Republican mouthpieces? And am I to be conciliatory to people whose “religious” leaders are far from the most pious and loving among us? Eminences such as Robert Jeffress, Tony Perkins, Jerry Falwell Jr., Ralph Reed, Paula White and James Dobson. These so called “people of God” are hate-filled vessels, pure and simple. And Trump’s fans stand faithfully behind them as well. 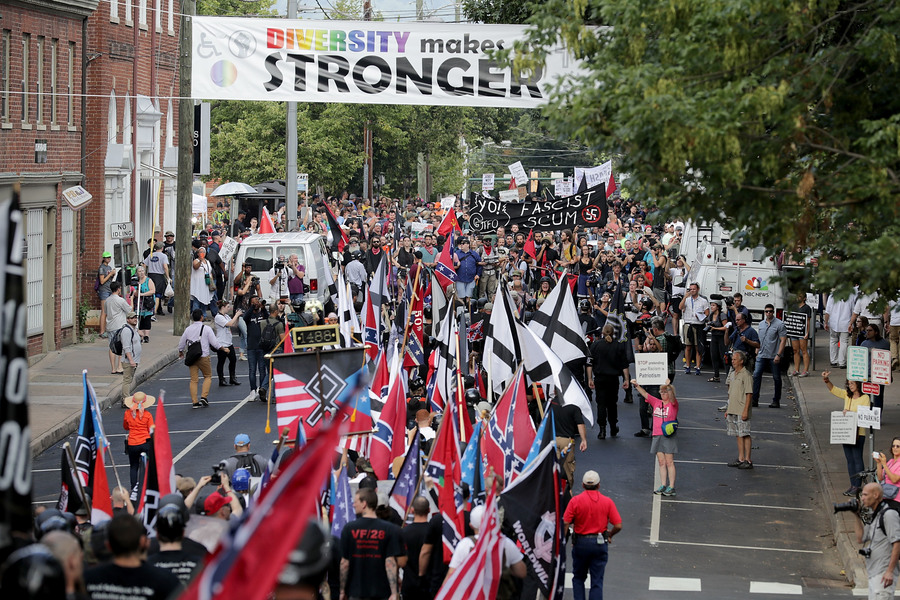 And with these “Christians” who rationalize that Nazi rallies, bomb sending Trump fans, and lunatics who massacre innocent people in a Synagogue have nothing to do with the hate and lies that come out of the mouth of the monster Trump? Am I to be civil to the gun-totin’ right-wing faithful who stand for a Republican party that steadfastly refuses to make any attempt to get guns off of our streets? A party that genuflects to the generous humanity of Wayne LaPierre? Why?

These people have even gone to the lengths of photo-shopping phony pictures of their monster rescuing people during Hurricane Florence and — are you ready — rescuing cats in Hurricane Harvey in Houston!

Am I to be civil to people who steadfastly choose to ignore that Putin and Russia put Donald Trump in the White House. Okay…allegedly…but the evidence seems to back this allegation up. Remember Don Jr.’s response to the email telling him they had something on Hillary? They don’t.

I’m to be civil to a person who casts an approving eye or a vote for any of these horrible people? Why? So they will see the light? So they will come to their senses? If two years of the ugliness of this monster in the White House haven’t by now soured this slavish bunch on him, and on all these hate-mongers, then nothing I can say or do will ever make them reasonable humans to me. I am past trying to “understand” these people and past making any effort at a dialogue with them. I have tried, and the shock of their arguments sent a jolt throughout my entire being

Standing behind their monster at his rallies these people unfailingly bring back the horror of the many black-and-white films we’ve seen of rabid fans at a Nazi rally in 1941. And the message is the same; immigrants will slice you, dark skinned men are coming for your women, the Jew bankers control the world. Case in point: Republican Ed Gillespie aired several “political” ads that flashed the words “Kill, Rape, Control” with grimy photos of MS-13 gang members.

This is a party that, in the main, stands in lock-step with a grotesquerie that took children from their parents at the border and put them in cages — some never to see their parents again. And these people, party members and their constituents, profess to be “Christians?” Am I to be civil to people who will countenance such cruelty? Such fear-mongering? Such an appetite for suppressing our Constitutional right to vote? People who can forget that their party leaders tried to kill The Affordable Care act seventy times and now deny they ever did this? People who stand and cheer for a reality show buffoon whose only plan for governance appears, to any sane person, to consist of ginning up their fear with lies and hurling demeaning insults at his critics? Who shout “lock her up,” blithely forgetting that the very same chant was passionately shouted by one of their own who pleaded guilty last December to making false statements to the FBI? Am I to be civil to people who are such hypocrites? And, no small thing, people who don’t “get” irony?

You try to be civil and “reason” with these people — I have. Then let me know how it went.

Tony Powers is a writer/actor/musician. His full bio may be seen by clicking on the picture, and then clicking on either of the 2 boxes below it.
View all posts by barkinginthedark »
« THE “AMERICAN WAY” – AN UNPOPULAR VIEW?
YOU GO GIRRRL! »

12 thoughts on “WHY MUST I REMAIN CIVIL?”