Can there be a sadder, more cruel irony than the fact that armies of aggression are, in the main, made up of young, poorly educated males with few prospects who will fight to preserve the very system that has put them in their predicament? Can anything be more surreal than fighting to return home to nothing? If you return home?

The person smiling in the picture above must have had all semblance of decency and ability to think for himself drummed out of him. To allow such a thing to happen, to be so empty as to be able to be filled with such callous disregard for basic humanity, he had to be whole-heartedly receptive in the first place. He had to feel disenfranchised, with a feverish need for power, because he is powerless in his life. Had he any kind of an education, or a higher education, any prospect of a decent job or a profession, would he be in this picture? Would he be grinning stupidly over a helpless bloody young boy he no doubt badly hurt? Here is our powerful hero below.

The following is from an article in Rolling Stone: “On January 15th, 2010, U.S. soldiers in Bravo Company stationed near Kandahar executed an unarmed Afghan boy named Gul Mudin in the village of La Mohammad Kalay. Reports by soldiers at the scene indicate that Mudin was about 15 years old. According to sworn statements, two soldiers – Cpl. Jeremy Morlock and Pfc. Andrew Holmes – staged the killing to make it look like they had been under attack. Ordering the boy to stand still, they crouched behind a mud wall, tossed a grenade at him and opened fire from close range. This photograph shows Mudin’s body lying by the wall where he was killed.” 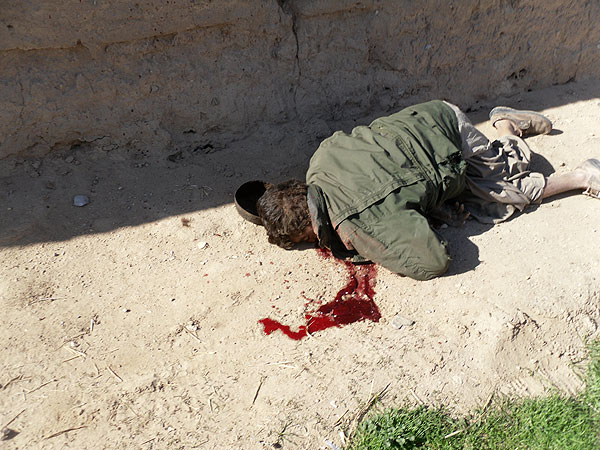 How can ordinary people be made to do such evil things? How could the Nazi soldiers do what they did? How could our soldiers in Afghanistan do the things they did? When people are poorly educated and left without any options, they will serve at the whims of an insane leadership, and they will become insane themselves. It has come to this, the powerful countries of the world are obliged to maintain large armies, and to maintain a large army, governments must also maintain a large underclass. This has been the case throughout history. Until this changes, until people force governments everywhere to provide free education to their citizens, education that leads to decent jobs, we will have endless wars and an endless supply of cannon fodder to fight them.

Tony Powers is a writer/actor/musician. His full bio may be seen by clicking on the picture, and then clicking on either of the 2 boxes below it.
View all posts by barkinginthedark »
« BENEATH IT ALL…
WHY NOT? »