YOU MAY HAVE NOTICED…PART TWO.

Posted by barkinginthedark ⋅ May 25, 2022 ⋅ 14 Comments
Filed Under  Citizens United, Money in Politics, Republican party, The Money

I am not a conspiracy person. When I say that The Money controls us all, and especially the politicians, I do not mean that the wealthy elite sit around tables planning how to fuck us, the little people. What I do mean is this: by and large the super-wealthy of our world do not think about us at all. Not even a little bit. Their only concerns are amassing property, money and power. As far as they are concerned, we do not exist. We do not figure in any of their plans to acquire that which they want and must have. 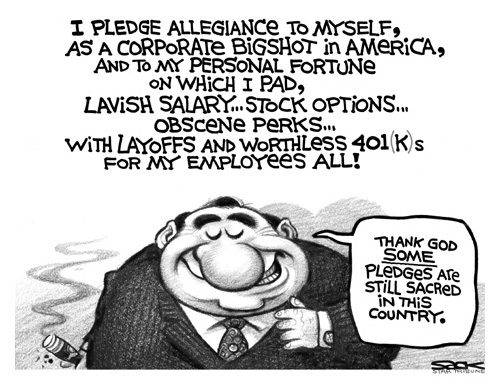 They may give a passing thought as to how their drilling for oil, digging for coal, making backroom insider-trading deals, or running a social media conglomerate may impact all of the rest of us. They may, but they will keep on drilling, digging making deals and buying politicians and that thought will pass as if it never was. They will promise whatever it is they need to promise to these politicians who make the laws of this, and any country, in order to help them drill that oil, dig out that coal, control the media, and gain that profit. They will, on many occasions, virtually stuff a politician’s pockets with as much hard cash as it takes to get what they want. And by the virtue of the ability to make their promises good, and to “donate” these large amounts of money to these politicians, they, The Money, are the power. They are in the business of making a profit at any and all cost to the fabric of society. If their quest for a profit then rips apart this fabric, this is not their concern. Their only concern is their shareholders, most of whom also are not concerned.

Do you wonder why the Republican Party refuses to take assault weapons off of our streets? Wonder why this same party is making voting more difficult for many? Why the Republicans are in the process of taking away a women’s right to choose what she does with her own body? Why Republican’s slashed $40 billion from the federal food stamp program? There is a simple answer. It makes us, the “little people” desperate and crazy! Keeps us all in a perpetual struggle to stay one step ahead of ruin. It takes our eye off of the root problem. Money in politics! Buy the worst get the worst. Keep people crazy and at each other’s throats while The Money lives large and keeps making a profit off of destroying our planet, tearing apart the Social Compact and creating world-wide war, poverty and despair.

Do you wonder why the Supreme Court’s Republican majority passed Citizens United, asserting that corporations are people and removing reasonable campaign contribution limits, thereby allowing a small group of wealthy donors and special interests to use dark money to influence elections? Do you?

The paradox is this; The Money is so powerful that even though we know the solutions to these problems, the will, and the way, to solve them is always drowned in a sea of…MONEY.

I do not believe in organized religion. I believe it plays a large part in many of the world’s problems. However, perhaps the wisest words ever penned, and certainly the words most pertinent to our problems here in America, come from the Bible’s 1 Timothy 6:10.

“For the love of money is the root of all of evil.”

Tony Powers is a writer/actor/musician. His full bio may be seen by clicking on the picture, and then clicking on either of the 2 boxes below it.
View all posts by barkinginthedark »
« YOU MAY HAVE NOTICED…
THE BALLAD OF MAGA NATION »

14 thoughts on “YOU MAY HAVE NOTICED…PART TWO.”