Unless we turn this battleship of state around post-haste we, as a country, are going to continue our slide into the mud hole of history alongside the glory that was Rome. As long as we continue to downgrade education, see; *(summary of Rick Perry’s education record in Texas at end of article), destroy the middle-class, and trade guns, and wars, for butter we are doomed. Last nights sorry Republican excuse for a “debate” should serve to illustrate their aversion towards programs that might (Mother Nature forbid) benefit the middle class. Seeing all these imbeciles onstage at once brings to mind the British wag who famously remarked “somewhere in England there’s a village missing a perfectly good idiot”. 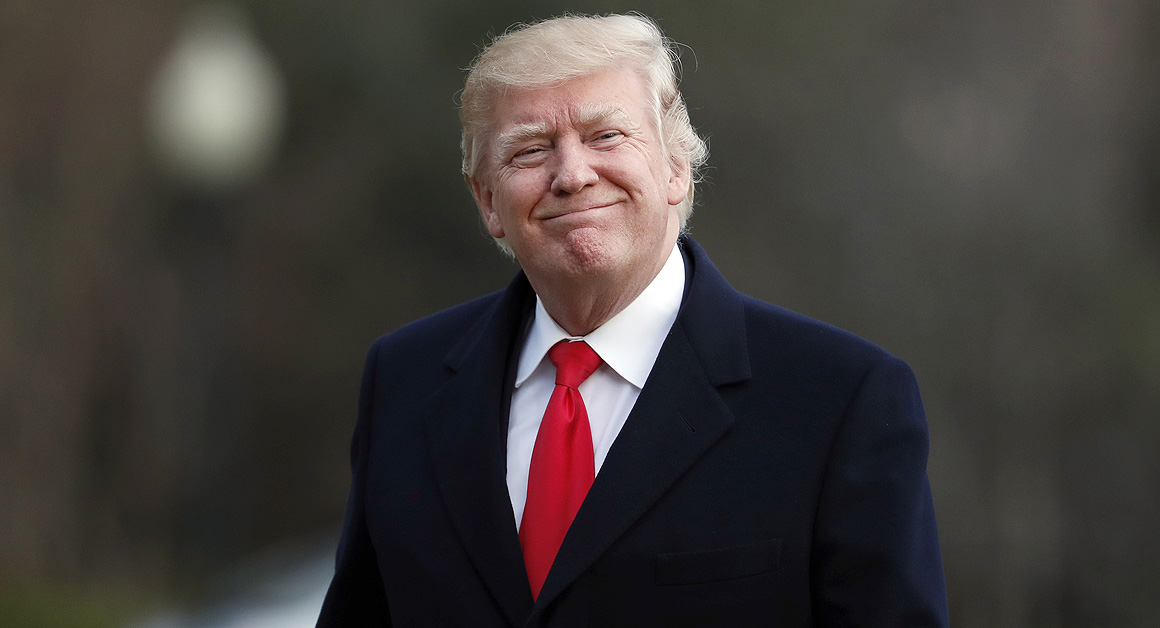 Witness Herman Cain’s witless **tax scheme that an independent tax analysis shows would raise taxes on the bottom 84% of us, while being a windfall to the top 16%. Nice try Herm. Michele Bachmann, bless her little religiously fevered mind, wants to send troops to Africa??? A jobs plan if I’ve ever heard one. And Mitt and Rick wanna out- glare and out-shout one another while ignoring er- actually Ricky has a plan – somewhat. He wants a flat tax. Only thing is, said ***Alan Auerbach, an economics professor at the University of California at Berkeley, the impact of Perry’s proposal would, under some formulations, raise middle-income taxes to more than they are now, and under others, low-income people would pay more. And, Auerbach said, “At the top, it’s definitely going to shift the burden away from the highest-income people,” also a nice try. Nice – but alas, somewhat lacking. And all these mental midgets are, make no mistake, the spawn of one Ronnie Reagan – Saint Ronnie to the fawning, but somewhat less than bright, Republican faithful.

Ever since California’s erstwhile Governor and future President of these United States, Saint Ronnie of Reagan ascended to power, I have watched my country slowly disintegrate before my eyes. With a few notable exceptions, they being Dwight D. Eisenhower, and to some extent Richard M. Nixon, most Republican Presidents in the last sixty years have been empty suits – fairly dim toadying front men for the plutocrats that owned and operated them. But Ronald Wilson Reagan was the quintessential empty suit – complete with hat, vest, and two pair of pants. Chief among his many gubernatorial achievements this jolly hail-fellow-well-met jelly bean gourmet single handedly dismantled the greatest free University system the world has known declaring; ****”a small minority of hippies, radicals and filthy free speech advocates” had caused disorder and that they should “be taken by the scruff of the neck and thrown off campus — permanently”,[1] then; he called for an end to free tuition for state college and university students, annually demanding 20% across-the-board cuts in higher education funding,[2] repeatedly slashing construction funds for state campuses, engineering the firing of Clark Kerr, the popular President of the University of California, and further declaring that the state “should not subsidize intellectual curiosity.[3]” I guess he would’ve been the one to know that. 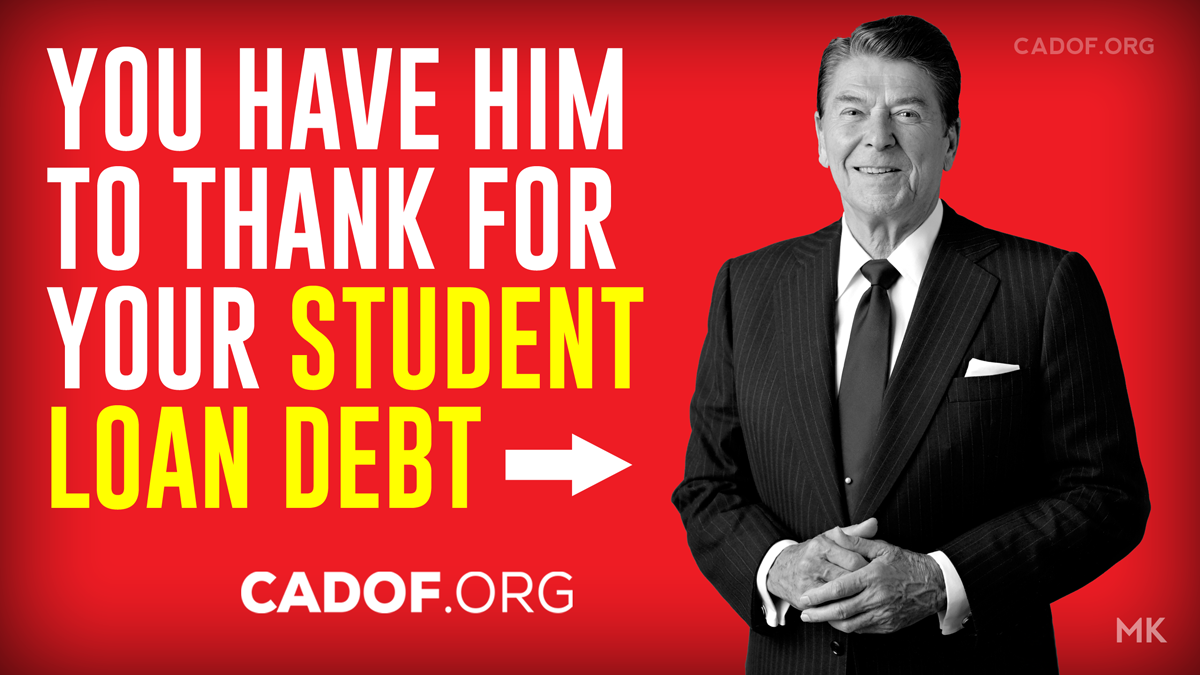 In his 1961 Farewell address President Eisenhower, a man who certainly knew the horrors of war first-hand, delivered his famously prescient warning; “In the councils of government, we must guard against the acquisition of unwarranted influence, whether sought or unsought, by the military-industrial complex. The potential for the disastrous rise of misplaced power exists and will persist” By the late 1970’s the military budget had declined in the years since the end of the Vietnam War, and we no longer had some 500,000 troops in Indochina which required huge amounts of war supplies. Of course, several hawkish organizations launched a campaign stressing the need for higher military spending to keep us ahead of the dreaded USSR. That, along with President Carter’s inability to stop the Soviet invasion of Afghanistan, or handle the Iranian hostage crisis, fed the atmosphere of crisis and led to the publics’ willingness to throw money at the Pentagon. Of course, lost in the shuffle was Eisenhower’s plea. And then, along came aw-shucks Ronnie to exploit the public’s jerried-up fear, and their just plain natural, but lovable, ignorance. Obviously, in him, they saw themselves. 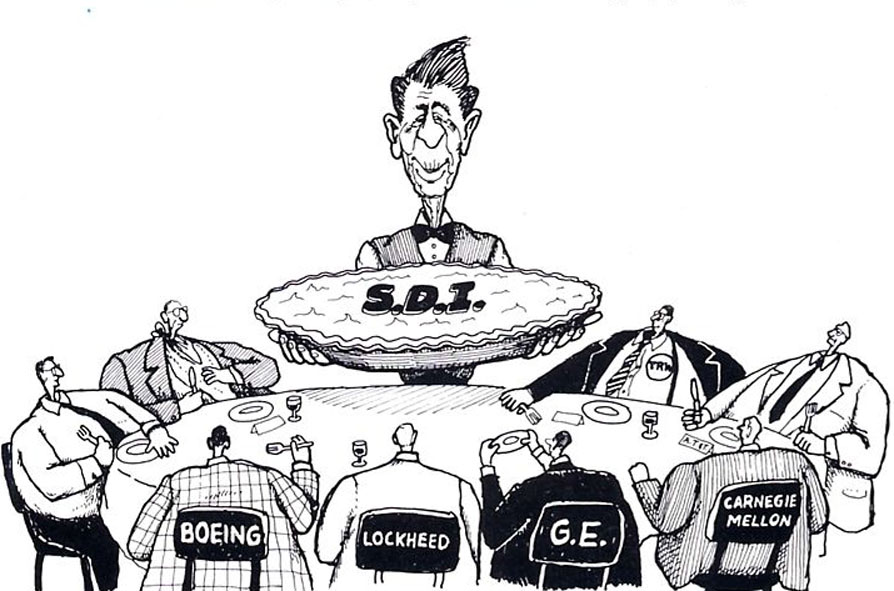 Upon being elected President, ostensibly by the progenitors of the same inbred mouth breathers who elected George W. Bush – twice (!), Reagan raised the military budget by $34.2 billion while cutting domestic spending programs by $29 billion. Between 1980 and 1986 he doubled the Pentagon’s budget. Never mind education, roads, mass transit, medical care – we didn’t need any of that there sissy stuff…and it seems, according to this current crap er – crop of Republican hopefuls, we still don’t. By 1985 The Pentagon’s massive allowance coupled with huge tax cuts (does this all sound familiar? Do the names Cheney and Bush ring a bell?) had us in the hole for $200 billion and counting. The Reagan “revolution” had made us a debtor nation, saddled with enormous trade deficits with our trading partners abroad, and tightened credit here at home…and started us on the road we find ourselves punch-drunkenly stumbling down today.

Let us now speak of “Reaganomics”, the Republican blueprint for how to fleece the middle class, also known as supply-side economics and trickle-down economics, of which the latter, to me anyway, engenders in me a mental picture of some rich guy’s piss slowly dribbling down a wall onto your middle-class head. Its key components are: reduce Growth of Government spending, reduce Income Tax and Capital Gains Tax, and reduce Government regulation. Or; the Plutocrat’s wet dream. In sum it amounts to; I’ll just start shoveling the taxes that those morons in the middle-class are paying over to my rich pals who own me lock, stock, and barrel, whilst lowering the tax rates for these very same rich pal’s in the bargain – sheer genius – if you don’t give a flying fuck about anyone who’s working for a living, and if you’re a giant sock puppet. Oh, and while we’re at it, let’s just strip all the regulations that keep my rich pals from gouging the last drop of blood they possibly can from the working stiffs. Hmmm…yeah, that’s a plan.

That last part is so good that Republican Presidential candidate *****Mitt Romney also thinks that we should strip some more governmental regulations on his pals. What a shock. So, anyway – Reagan enacted lower marginal tax rates in conjunction with simplified income tax codes and continued deregulation. During his presidency the annual deficits averaged 4.2% of GDP[3] after inheriting an annual deficit of 2.7% of GDP in 1980 under president Carter.[4] The rate of growth in federal spending fell from 4% under Jimmy Carter to 2.5% under Ronald Reagan.[2]  If your searching for the beginning of the idea of “starving” the federal government a la Grover (nobody-liked-me-in-high-school-now-you’re-all-gonna-pay) Norquist, and all these other selfish right-wing Conservative buttholes, like Perry, Romney, Cain, Bachmann, Palin, and their Libertarian pal- that other ignorant-of-history fellow, Ron- we-don’t- need- FEMA- Paul, look no further than Saint Ronnie of Tampico. And as far as evidence that Reagan’s was the anti-regulation presidency, the number of pages added to the Federal Register (which records the rules and regulations that federal agencies issue per year), declined sharply under Reagan. This is not meant to absolve Jimmy Carter for his part in deregulation, but it was Reagan who took deregulation to dizzying heights. And P.S., Reagan’s administration is the only one not to have raised the minimum wage. Wow! – The Plutocrat’s quinella. You can expect that times two if you (Mother Nature forbid) get a Perry, or a Romney, in The White House. 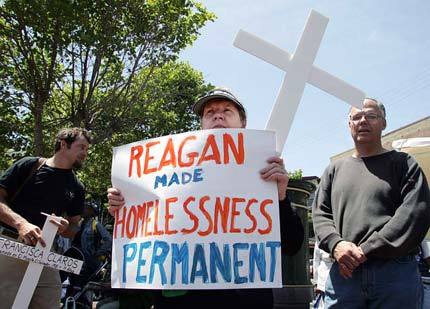 As far as the issue of poverty in America, and robbing the working class to give to his rich-ass friends and backers; under Saint Ronnie’s astute stewardship, the number of Americans below the poverty level increased from 29.272 million in 1980 to 31.745 million in 1988, which means that, as a percentage of the total population, it remained almost stationary, from 12.95% in 1980 to 13% in 1988.[25] The poverty level for people under the age of 18 increased from 11.543 million in 1980 (18.3% of all child population) to 12.455 (19.5%) in 1988.[26] The share of total income going to the 5% highest-income households grew from 16.5% in 1980 to 18.3% in 1988 and the share of the highest fifth increased from 44.1% to 46.3% in same years. In contrast, the share of total income of the lowest fifth fell from 4.2% in 1980 to 3.8% in 1988 and the second poorest fifth from 10.2% to 9.6%.[27] And during Reagan’s first term, for the first time, homelessness became a visible problem in America’s urban centers, leading many to blame Reaganomics.[28] In the closing weeks of his presidency, Reagan told the New York Times that the homeless “make it their own choice for staying out there.” [29] Political opponents chided his policies as “Trickle-down economics“, due to the significant cuts in the upper tax brackets.[30]   Yes, with such epic disdain for the less fortunate among us, he is certainly deserving of Right-wing Republican sainthood alright.

It bears repeating that this dismal record of wanton destruction by one of the very worst Presidents in our 235 year (and counting) history is exactly where our downward slide began. And I can not leave this without mentioning his doppelgangers (I was so tempted to spell that with one p), George W. Bush – another tale of ineptitude writ large- and the current heirs apparent, one Rick Perry, whose Presidential ambitions rival those of Sarah Palin and Michele Bachmann for sheer audacity, and hallucinatory ability regarding whatever capabilities he might think he has, and Cain, Romney, and Ron Paul (who has a juuuust a tad too much of the Ayn Rand in him for my taste.) And, the very worst of the lot; master grifter, con man extraordinaire, fraudster, liar, racist, womanizer, traitor, tax cheat, narcissist, looter of charities, and all-round lumbering grotesquerie, Donald J. Trump.

As much as I revere and admire Franklin Delano Roosevelt for his uncommon patrician concern for the common man, there isn’t a word strong enough in the English language to describe how much I dislike Ronald Wilson Reagan and detest his ugly spawn Donald Trump. Both world-class dimwits, whose measured IQ’s no doubt soar to the stratospheric heights somewhere between 98 and 105, and whose pictures should be put not on the fifty dollar bill but embossed onto every sheet of every roll of toilet paper that leaves the supermarket…the ones anyway, that Grover Norquist, Karl Rove, the Koch Bros., Ralph Reed, Mitch McConnell, Jim Jordan, Lindsey Graham, Devin Nunes, Sean Hannity, Laura Ingraham, Tucker Carlson and Rush Limbaugh, to name just a few, are not on.

Am I angry? Damn fucking right!

Tony Powers is a writer/actor/musician. His full bio may be seen by clicking on the picture, and then clicking on either of the 2 boxes below it.
View all posts by barkinginthedark »
« ARE WE A VIRUS? (A Speculation on the Condition of Being Human)
Why Should I Be Bothered to Signal When I Can Get Into a Nice Major Accident – and Hey, Maybe I Can Even Kill Someone? »