THE BALLAD OF TED CRUZ

In 2013, freshman Sen. Ted Cruz of Texas said he had a plan to do something that seemed impossible. He could force President Obama to strip the funding from the landmark health-care law that had come to bear his name — Obamacare — by threatening to shut down the government. 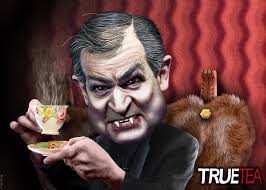 Drunk on the booze

From all the hare-brained

Who voted him in

Who now have to grin

And bear all the pain

And all the hard rain

They’ve brought on us all

When Cruz took his ball

And cut short the game

Saying “I’m not to blame

I just want my way

How I say he must

So now I will bust

Up the whole damn shebang

How many folks hurt

Who ends up in dirt 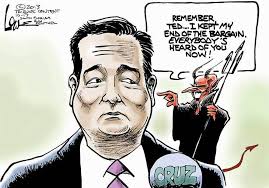 Down to their last cent

Who can’t pay the rent

Who can’t find a way

To face one more day

Without milk or bread

No way to be fed

I have faith in you

He’s not our kind

And all this upset

Is his – don’t forget

He wanted it thus

He brought this on us

Of filling the bill

‘N when they do they should pay

As we Tea Partyers say No we just cannot trust

Someone different than us

Someone with darker skin

Out to do us all in

For ending the game.

Not me Teddy Cruz

Tony Powers is a writer/actor/musician. His full bio may be seen by clicking on the picture, and then clicking on either of the 2 boxes below it.
View all posts by barkinginthedark »
« ANOTHER VIEW FROM THE TEA PARTY: INTELLIGENT FACTION (# 4 in the Satirical Series Emails from the Tea Party)
“VIRTUALLY” VIRTUAL »

2 thoughts on “THE BALLAD OF TED CRUZ”