SO… THIS CORPORATION WALKS INTO A BAR…

Are corporations people? The U.S. Supreme Court says they are, at least for some purposes. And in the past four years, the high court has dramatically expanded corporate rights.

It ruled that corporations have the right to spend money in candidate elections, and that some for-profit corporations may, on religious grounds, refuse to comply with a federal mandate to cover birth control in their employee health plans.

The following is a true story:

The other day I had to use the rest room in a restaurant where I was dining. I chose to skip the one marked Men, and the one marked Women, and instead opted for the one marked Corporations, which I must say was quite opulent. 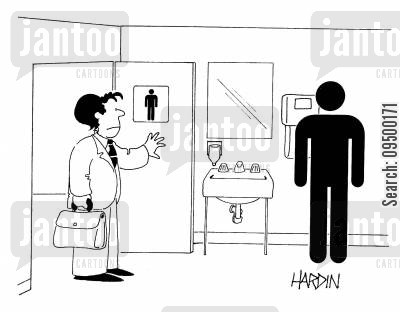 Upon entering I saw that there were two other corporations already at the urinals, and I think, if I’m not mistaken; one of them was this Donald Trump corporation. I’m almost sure it was, but you know how it is in a corporation’s room, one really doesn’t want to stare at another corporation. Anyway, after I finished and had zipped up, a very nice corporation turned on the sink tap for me, and after I had washed my hands, gave me a towel, and then brushed my jacket with a little whisk broom. I left a single in the corporation’s tip basket, checked myself one more time in the mirror, and headed out back to my table.

So, I’m on my way back to my table when this gorgeous corporation, and I mean breathtaking, sitting at the bar catches my eye and smiles at me. Of course I turn around thinking she must definitely be smiling at some other corporation who’s right behind me. No…this unbelievably stunning corporation is smiling at me! What do I do now? I’m there with my main squeeze who is not a corporation to trifle with – but still… 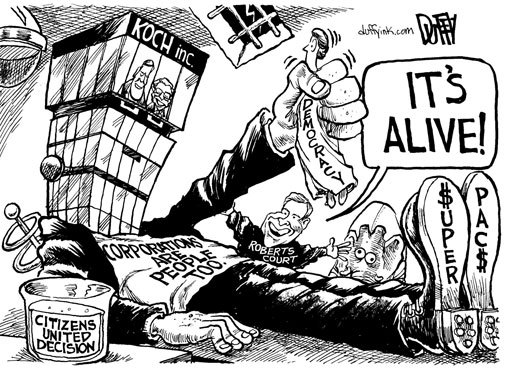 So, I make my way over to the bar and, as I’m walking, this surreally sexy corporation is eyeing me up and down…and then she slowly and deliberately crosses her legs, and hitches up her skirt, flashing a bit of inner thigh as she does. And, let me tell you, she had two of the shapeliest gams you’ve ever seen. Gams that any red-blooded American corporation would die for. Never in all my born days have I seen a corporation with legs like that. And I’m thinking – is this my lucky night? 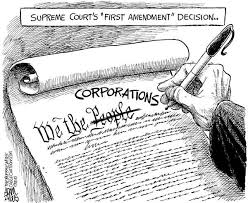 I could tell just by looking that this gorgeous corporation could’ve easily been the corporation that sang that great song I Am Corporation – you know, I am corporation, hear me roar…that’s how much presence this creature had. So, I get to the bar and I say to the semi-bald corporation tending bar – in my best Humphrey Bogart voice of course – “whatever this angel of a corporation’s having I’ll have double,  and back her up also.”

I turn to this creature who stepped out of a dream and I give her a long direct stare. This corporation had the biggest, greenest, eyes I’d ever seen. Unblinking, she held my gaze, not a hint of a waver (remember – I am corporation, hear me roar). The semi-bald corporation brought our drinks. Without taking our eyes away from each others steady stare, we lifted our drinks and softly touched glasses. I’ve never been too big on drinks like pink corporations but this one tasted like a million dollars 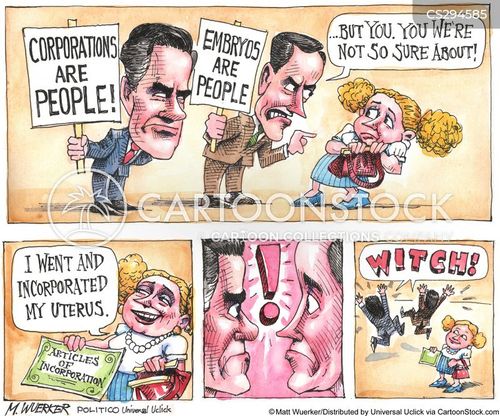 Finally, I heard this lovely corporation’s voice… “Who’s the corporation you’re with?” Her voice sounded like a choir of angels whispering. Channeling my inner Bogie I said, “Does it matter sweetheart? “Maybe I’d like to meet her” the choir breathed, “She looks like my kind of corporation.” Wait a minute…what was going on here? Then; more angels -“Why don’t you bring your corporation over and let’s all have a drink together, it might turn out to be fun.” I thought to myself – why not? I said “A threesome?” “Well…we’ll see” she wafted. And, leaning in, her full breasts pressing against me, she gave me a soft, warm, wet, kiss on the mouth…Then, that honeyed whisper; “Why don’t you go and tell her you’ve run into a friend and to come have a little taste with us.” A faint smile played across her perfect face.  This corporation was very persuasive.

I wasn’t sure how my corporation would react to the idea, but I had to try. “Sounds like a plan sweetheart,” I said. “I’ll just be a minute,”and started back towards my table. As I left the bar and entered the dining room I saw my corporation talking to…Donald Trump?? What?

I got to the table and my corporation said “Darling, you remember I told you about the corporation I used to work for? Meet Don, You won’t mind if he joins us will you?” Wow. This was now officially a very sticky situation. My corporation was a Republican? All these months – how did I miss it? Granted we never really talked poli—Wait a minute! Pull yourself together corporation! Think! I had one corporation at the bar, and one corporation at our table, and now this new corporation had entered the picture. “Sure” I said. “I’ll be right back”, and I headed to the bar.

“It’s complicated” I said to this sylph-like apparition of a corporation who just coolly sipped her pink corporation …“As much as I want to tonight, and sweetheart – believe me, I want to – I don’t think it’s possible. Why don’t you give me your number and we’ll do it another night” The corporation slowly put her drink down, then slowly turned to me, and with the sweetest smile you ever saw on her angelic face she leveled a look of pity at me like I was some kind of dunce. “Who wants you?” she said “Don’t you get it? I want that honey of a sweet corporation you came in with… sweetheart.” 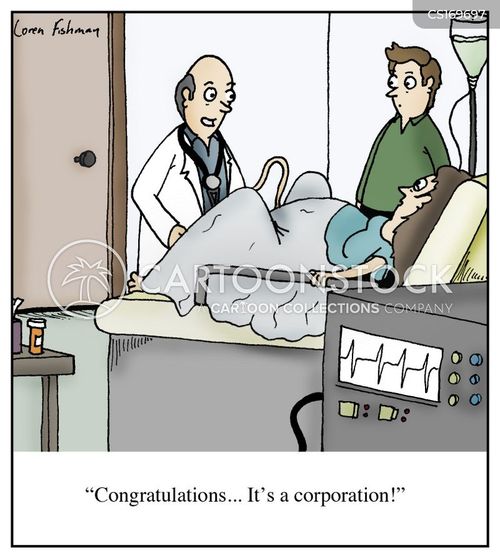 above cartoon by Loren Fishman at: https://humoresquecartoons.com

Tony Powers is a writer/actor/musician. His full bio may be seen by clicking on the picture, and then clicking on either of the 2 boxes below it.
View all posts by barkinginthedark »
« THE FEW, THE PROUD, THE IGNORANT
A Ballad to the Ladies (and Their Wives, Husbands and Boyfriends) Relative to This Upcoming Major Election »

2 thoughts on “SO… THIS CORPORATION WALKS INTO A BAR…”