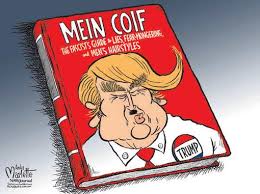 By now it should be obvious – Herr Nazi Don’s M.O

He says these insane things and watches the newsies go

“My god – he really said that? And he doubles down the rave

How much ink and ugly stink and civility he can threaten This ugly puss-filled boil upon the body politic

This would-be Hitler spewing hate for each Beatriz and Juan

This running sore, this pandering whore, this unhinged Nazi Don

Make America Great Again? Is this some kind of joke?

His campaign slogan should be “Help me get my ego stroke” 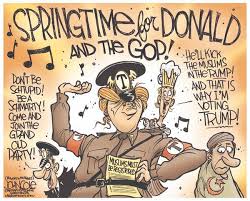 Why do you think his name’s  in gilt

On each shitbox he’s built

Because he’s so damn insecure

He desperately must make sure

You know it’s his even though it’s shitty

Who thinks he can choke

Debate by repeating his crap

He thinks repeating lies makes them a fact

And if you haven’t caught on

You belong in a locked padded cell

All the crap that he spews

Is to stay in the news

Though all of it has a bad smell

If you think that he cares a whit

For anything but his own shit

I think you’re stupid and way too far gone

You elect this clown

And we’ll all go down

Tony Powers is a writer/actor/musician. His full bio may be seen by clicking on the picture, and then clicking on either of the 2 boxes below it.
View all posts by barkinginthedark »
« ODE TO TRUMP PART 2 (SIEG HEIL NAZI DON)
NAZI DON (AND HIS CHINESE SUITS AND TIES) »