Since he lies and calls all his foes names

I’m proposing we all do the same

And since he is quick to profess

Immigrants are to blame – and the press

I say we say he’s born in Bonn

Whose lies are custom made to fit

The bigotry, the hate, the fears

That fills the void between the ears

Of every rabid ignoramus

Whose vote will now forever shame us

Who thinks their hate will now be sated

With matching nasty sneers and glares

Who’s known to even cheat at golf

Whose speeches reek of Herr Adolf

Men’s room porter down in Hell

Would be a job that suits you well

No doubt you’d be the perfect fit

Of course “the uneducated” are people you “love”

Trailing this stench  wherever you go

These idiots who think you’re slick are in a coma

Upon the body politic you‘re a spreading carcinoma 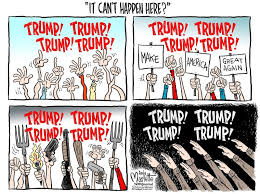 When I was young hope burned so bright

I thought this land a shining light

I can’t believe it’s come to this

A fascist with a vampire’s kiss

A step away from the oval office

With nuclear code to truly “off” us

Whose finger could be on the button

I sit here and I wonder what in

Heaven’s name has brought us to

This nightmarish farce we’re going through And if he ever should get in

This petulant child with thin skin

Imagine the forces put in play

When this monster feels slighted in some small way

You’ve seen his reaction to any challenge

The reaction of someone quite unbalanced

This carnival barker prone to drama

The polar opposite of Obama

The antithesis of Presidential

The Senate’s advise and consent’ll

Be a thing to be ignored

For he knows everything of course 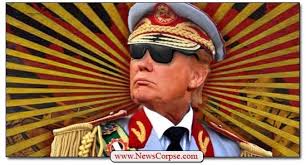 Unhinged – and more’s the pity it

Is so transparent to someone

Who isn’t blind and deaf and dumb

Who has the least bit of intel

And also has a sense of smell

This bag of slime

This stain upon our land

With his big loud mouth

This germ we MUST withstand

Full of hate, you sleazebag con

But you are here to carry on

Hitler may be dead and gone

Tony Powers is a writer/actor/musician. His full bio may be seen by clicking on the picture, and then clicking on either of the 2 boxes below it.
View all posts by barkinginthedark »
« ODE TO TRUMP
NAZI DON’S M.O. »