New York – In the wake of a lawsuit brought against Fox News Chairman Roger Ailes by ex-anchor Gretchen Carlson alleging sex for promotion, Fox executives closed ranks in a furious defense of their chairman.

Mr. Ailes banned the wearing of skirts by his very attractive female news reporters and also ordered translucent desks placed on their sets so that their legs could be seen beneath them.

Said one Fox exec on the condition of anonymity; “Gretchen’s obviously a disgruntled cunt. There is no sexism here at Fox – none! Never was, never is, never will be. She’s just another bitch skirt with a great rack who lucked into a gig and then blew it – pun intended. All of us swingin’ dick dudes here at Fox News hold women in the highest regard.” 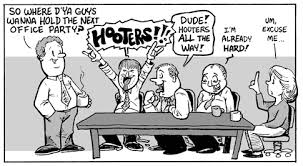 Said another, also on the condition of anonymity; “What an ungrateful twat! Roger Ailes, like all us men here at Fox News, would never think of a woman as a sex object – even though all our Fox babes are capable of causing wood whenever you see them. I mean, just brushing up against any one of them in the elevator – accidentally on purpose – gets me hard. Confidentially, between us guys, the tits on that Megyn Kelly are so great that I could come all over her face just looking at them. If my wife ever knew this she’d cry her little eyes out and be unable to clean the house, wash my underwear, or burn dinner for a fucking week.”

Another Fox executive was shocked at the lawsuit saying; “Until this ridiculous assertation that we here at Fox News don’t respect the babes, I always had a huge hard-on for Gretch – but now I wouldn’t even do her with Hillary’s dick.”

Greta Van Susteren, another Fox anchor, pictured below said; “I’ve been here for 15 years and have never experienced any unseemly conduct of a sexual nature.”

Tony Powers is a writer/actor/musician. His full bio may be seen by clicking on the picture, and then clicking on either of the 2 boxes below it.
View all posts by barkinginthedark »
« NEWS FLASH: BARKING OBTAINS AN ADVANCE COPY OF A TRUMP SPEECH
DECIPHERING “MAKE AMERICA GREAT AGAIN” »