A PEEK INTO OUR FUTURE IF… 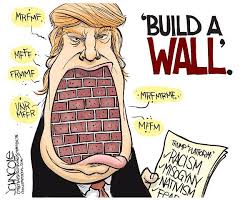 Washington D.C. – The class-action lawsuit brought by the 12,750 Mexican laborers who built President Donald Trump’s wall dragged on into its third year and will be taken up by The Supreme Court next month.

The suit charges President Trump with failure to pay any of the workers the wages they earned for their years’ work.

In his defense President Trump today said from Dubai – where he is on the third leg of his around the world golfing vacation while Attorney General Sheriff Joe Arpaio runs the country – “I made it very clear that the name Trump was to appear on the wall in 6 foot high gold letters every 500 yards all across the 1,954 mile long wall and not only did 12 of these letters measure out at 5 feet 8 inches but on at least 9 occasions the name Trump was placed on the wall more than the specified 500 yards apart. On one occasion my world famous imprimatur was more than 16 yards over the specified distance between Trumps. As a consequence, I was forced to withhold the more than generous 7 dollars an hour wage from each worker due to this disgracefully shoddy performance. It’s not my fault they didn’t understand all this. It’s unbelievable that me and my people were supposed to know that they only understand Mexican.”

Interviewed at Dulles Airport, the U.S. Ambassador to Mexico, Lara Yunaska, Eric Trump’s wife, said; “it’s a disgracefully shoddy performance. Couldn’t these people understand plain English? This happened because these Mexicans only understand Mexican. It’s unbelievable.” She then boarded Air Force One for 4 months on the Cote d’Azur in France.

Secretary of State Donald Trump Jr. humphed “this is a, pardon-me-while-I-laugh, class action suit brought by some low-class wanna-be immigrants who can’t even speak English,” as he boarded the Trump plane for a month in Africa shooting endangered wildlife.

Contacted in St Barts, where she is taking a few months R and R, Housing and Urban Development Secretary Melania Trump said; “I have a dream…but, for now, I’ll just say that this is a, pardon-me-while-I-am-to-laugh, class-action suit brung by some low-class wanting-to-be-immigrants who can’t even speak the English.” She then went back to approving the architect models for the “incredible” Trump “Millionaire Collection” Condos in Palm Beach, Florida.

The new Chief Justice of The Supreme Court Barron Trump, appointed to the court after the Republican Congress  passed a special Constitutional amendment allowing 10 year old heirs to large estates to be sitting justices, refused to recuse himself as the suit heads for the court saying; “Why should I? It’s my court. And what’s the good of being on The Supreme Court if I can’t fix it that my own father is a winner? It’s unbelievable that these Mexicans only understand Mexican! As I see it they are clearly in the wrong. Case closed – and tell my nanny to get me my blankey! Now!”

Tiffany Trump was attending the ribbon cutting ceremony at the newest Trump clothing factory in China and was unavailable for comment.

Tony Powers is a writer/actor/musician. His full bio may be seen by clicking on the picture, and then clicking on either of the 2 boxes below it.
View all posts by barkinginthedark »
« ALL HAIL THE (GASP) POSSIBLE COMMANDER-IN-THIEF
GOD SUES TRUMP! »

3 thoughts on “A PEEK INTO OUR FUTURE IF…”