DONALD’S DILLEMA or: DON’T BLAME ME

An unnamed source deep inside the psychotic Trump campaign of blame has informed Barking in the Dark that Donald Trump has a real dillema.

The source told us “he’s continually complaining that he’s running out of people to blame, and he’s blaming us for this.” When we asked; “complain about what exactly,” the source said; “everything – exactly!” This would include placing the blame for getting stuck in an elevator in Colorado on Friday on the fire marshal who rescued him, saying the fire marshall did not know “what he was doing” and said his rescuer “was probably a Democrat.” He also stated he was “not a fan of” the marshal.

When he said on ABC’s This Week that; “Vladimir Putin is not going into Ukraine, OK, just so you understand. He’s not gonna go into Ukraine, all right? You can mark it down. You can put it down. You can take it anywhere you want.” When informed by the shows’ host George Stephanopoulos that Putin went into the Ukraine in 2014 Trump blamed President Obama babbling; “OK – well, he’s (Putin) there in a certain way. But I’m not there. You have Obama there. And frankly, that whole part of the world is a mess under Obama with all the strength that you’re talking about and all the power of NATO and all of this. In the meantime, he’s going away. He take – takes Crimea. He’s sort of, I mean.”

That is his comment word for word…perfectly clear – right?

And the carnival of blame doesn’t stop with Mr. Trump himself. When his wife Melania plagiarized an entire section of a Michelle Obama speech at the Republican convention his campaign’s response was; “Certainly we’ve noted the Clinton camp was the first to get it out there in trying to say there was something untoward about the speech Melania Trump gave.” In other words, this was Hillary Clinton’s fault for Trump’s wife’s plagiarism. Which, of course, makes perfect sense in the fun house mirrors of Trumplandia.

Regarding the horrible shooting in the Pulse nightclub in Orlando Trump placed the blame on President Obama and, by extension, Hillary Clinton saying; “If you had some guns in that club the night that this took place … you wouldn’t have had the tragedy that you had.”

Hey, what a great solution to gun violence – let’s all get strapped!

Even Brexit is, according to Trump, Obama’s fault as Trump blamed the results of the Brexit referendum on President Obama, who he accused of meddling in British affairs.

When the Trump campaign posted a reprehensible anti-Semitic picture of Hillary Clinton with a Star of David atop a pile of cash, Trump suggested Clinton and her allies were using the matter to distract from her own recent campaign troubles. Trump said the tweet portrayed “a basic star, often used by sheriffs who deal with criminals and criminal behavior.” Oh…yeah…of course. Why didn’t I see it that way? Duh!

He even humiliated himself with a disgraceful attempt to blame the shootings that took the lives of three Baton Rouge, LA police officers on President Obama. Really!

And, the gold-star Muslim parents who lost a son to a suicide bomber in Iraq – and were insulted by Trump – will now continue to be attacked by this weak thin skinned crybaby since Trump now blames them for whatever ugliness he aims their way because the father – and how dare he – in defense of his hero son and the Muslim religion, “viciously attacked” him. Trump! The King!

As far as the Democratic convention winning the ratings game Trump told The New York Times; “I didn’t produce our show – I just showed up for the final speech on Thursday,” after the paper asked for his opinion on why the Democrats had won the ratings game, in effect blaming the lackluster four day affair on the GOP. Of course Trump himself had nothing to do with procuring the star studded line-up of speakers which included such erudite political luminaries as actor Antonio Sabàto Jr., 509th ranked pro golfer Natalie Gulbis, Willie Robertson – a reality TV star from A&E’s “Duck Dynasty, soap opera actress and avocado farmer Kimberlin Brown and Ultimate Fighting President Dana White. Great geopolitical minds all. So of course this star stuffed collection of the friends of Donald should have amassed “yuge” ratings.

Now, he is whining like a little boy about the NFL’s game schedule clashing with the Presidential debates…even though the debate schedule was made up in September of 2015. Trump asserted that the NFL sent him a letter complaining to him about the debate schedule in a letter. This was immediately refuted by the NFL. A spokesman for the NFL said the football league didn’t send a letter to Trump as the billionaire businessman claims. So Trump said; “You know, Hillary Clinton wants to be against the NFL. She doesn’t — maybe like she did with Bernie Sanders, where they were on Saturday nights when nobody’s home.”

Huh??? What the fuck does that even mean? (For an answer see the post-script) 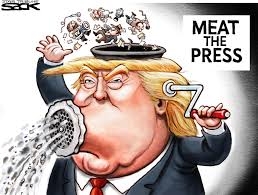 And, to this growing list of blame let’s now add these items; Trump is laying the groundwork for weaseling out of the debates by blaming the scheduled dates. So, even the calendar is against poor Donald as well.

He is also now using the vaunted but rarely used pre-blame gambit and pre-blaming “rigged elections” for his (we hope) impending loss in the coming Presidential election – even though it is his own Republican Party that is continually attempting to disenfranchise voters.

The sad bottom line is this; Donald Trump can do no wrong. He is perfect and anything that goes wrong in his sphere of influence is never his fault but rather is always the fault of somebody else. It should be patently obvious to all of us that nothing Donald J. Trump ever says or does is the cause of any problem or situation that may arise coincidentally immediately after he does something seemingly crazy – or says whatever manic gibberish flies out of his duck lipped mouth.

After all – God is infallible.

P.S. Psychiatric textbooks call his type of speech pattern, which is similar to that exhibited by people with hypo-mania, as ‘flight of ideas.’

Tony Powers is a writer/actor/musician. His full bio may be seen by clicking on the picture, and then clicking on either of the 2 boxes below it.
View all posts by barkinginthedark »
« AN OPEN LETTER TO DONALD TRUMP FROM ADOLF HITLER
THE SHRILL- NESS OF VICTIMIZING, THE AGONY OF DE FEET IN THE MOUTH, THE STENCH OF BULLSHIT! »

15 thoughts on “DONALD’S DILLEMA or: DON’T BLAME ME”