250 + LBS OF ROTTING GARBAGE STUFFED INTO A BLUE SUIT or: YOU CAN’T SHINE SHIT!

Donald J. Trump is without doubt the most foul of earth’s creatures. To call him a pig is to demean a most smart and noble animal.

This monstrous creep is the end result of years, decades, of selective Republican inbreeding. Years of homophobia, years of xenophobia, years of assaults on women’s rights, years of dog-whistle racism, years of fighting for the wealthy – at the expense of everyone else. In short, he is Republican writ large. This obese buffoon would be quite amusing were it not for the fact that he left “amusing” way, way back there when he first lurked in the contestant’s dressing rooms drooling as he stared at the naked 18 year olds in his bullshit beauty pageants. Circuses that existed for the sole purpose of putting this vile grotesquerie in close proximity to attractive young females who he could then force his odious ugliness upon. Way back there when he groped the many women who have now stepped forward to confirm this repulsive predatory piece of  shit’s own loathsome words.

This is a creature so disgusting, so vile, so repellent, as to give one pause that any woman would even be seen with him in public, let alone allow herself to be willingly crushed beneath his flabby girth as he snorts and wheezes above her. 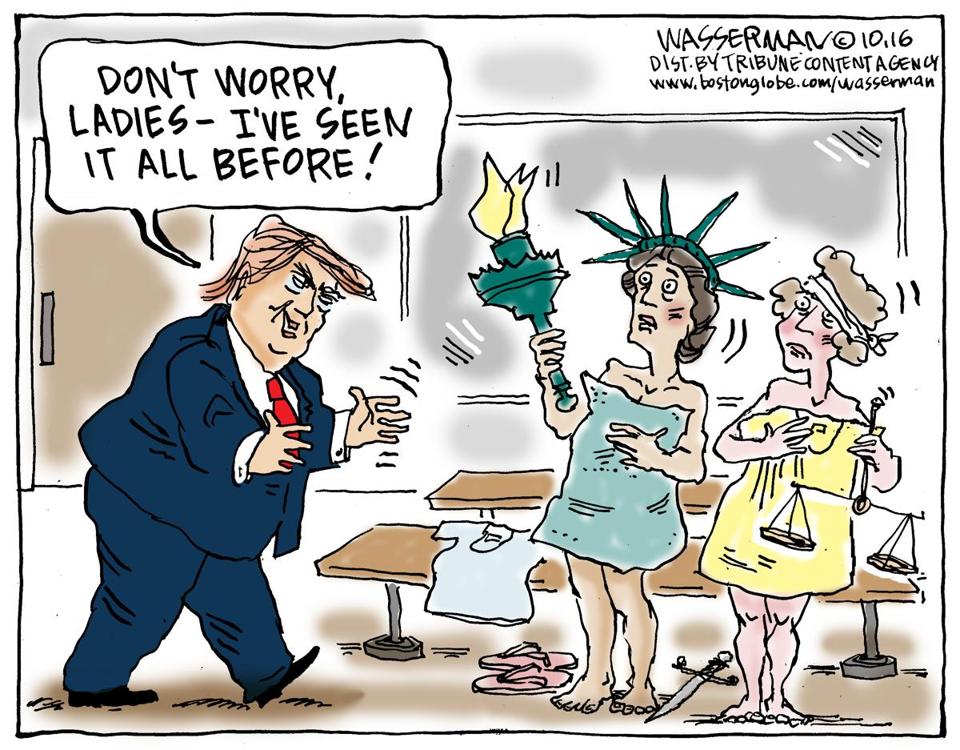 This bloated bloviating clown, this churl, this walking pile of excrement, has now shown us all exactly what we New Yorkers always knew he was – and is; an  insecure, insincere, self-serving phony who probably has no friends other than business acquaintances who, if he were broke, would flee from him as rats would flee a sinking garbage barge. We could compare him to a braying ass were it not an insult to donkeys everywhere.

It is impossible to overstate this performing seal’s loutish vulgarity, (and I do not wish to denigrate any seals anywhere by this comparison), his boorishness, his all-encompassing hideousness. And it is this deformed thing that our rotting cynical Republican Party deems worthy of nominating as their standard-bearer for the office of The President of these United States of America. The odor emanating from this elevation is offensive in the extreme.

Donald J. Trump epitomizes every ugly thing I have ever thought about the Republican Party. For the sake of this country he, and they, must be roundly repudiated.

Tony Powers is a writer/actor/musician. His full bio may be seen by clicking on the picture, and then clicking on either of the 2 boxes below it.
View all posts by barkinginthedark »
« LEARNING OUR A B C’s
WHY I DESPISE THE REPUBLICAN PARTY – NOW, MORE THAN EVER »