WHAT A FUCKING NERVE! REDUX There is no end to the insulting nerve of the despicable Republican Party. These criminals went on and on and on – blah blah blah blah blah – about Bill and Hillary Clinton’s “possible” personal profit from the Clinton Foundation. They never let up in their accusations of conflict-of-interest. As far back as 1992 they targeted the Clinton’s on financial contributions by Bill and Hillary Clinton into a real estate entity known as Whitewater Development Corporation during his time as an Arkansas state official. There were three separate investigations! Eventually, the Justice Department and independent counsel launched investigations. Nothing was ever proved.

In 1993 it was Travelgate – and independent Counsel Ken Starr found no blame rested with Bill Clinton. Another independent counsel scrutinized Hillary Clinton’s involvement and statements about the firings but seven years after the event, he found no basis to bring any charges against her.

And it went on and on and on. Years of unproven accusation after unproven accusation. These shitbags even held hearings accusing Hillary Clinton in the suicide death of Deputy White House counsel Vince Foster! And, the Republicans billed us a total of nearly $80m for all this unending harassment. As I have written before; Republicans do not govern, their agenda is doing whatever they can to prevent others from doing so.

Now, Republican lawmakers and watchdog groups have asked whether Clinton Foundation, established in 1997, engaged in conflicts of interest or quid pro quo deals during Hillary Clinton’s tenure as secretary of state. Really?

I was willing to wait and see but…

…these same self-righteous slimy Republicans see no wrong in Trump’s vast, complicated network of businesses under the Trump Organization, including numerous foreign investments and debts, which could create unprecedented conflicts of interest when he takes the oath of office as U.S. president in January. Contrary to what government ethics experts say. Hey, not to worry…right?

And, that other paragon of Republican virtue Rudy Ghouliani, perhaps a pick for secretary of State, faces potential conflicts of interest should he be appointed to the position. The former New York City mayor has been paid millions as a lawyer and consultant for foreign governments, according to a Politico report. The outlet notes that such ties — some with clients who were at odds with U.S. foreign policy – were considered a major issue during Ghouliani’s presidential run in the 2008 cycle. He collected millions working for foreign governments including Qatar and Venezuela, and he made paid speeches to help an exiled Iranian political party be removed from terror lists. And the Clinton’s are investigated?

Do we need to cite what a lowlife racist anti-Semitic Fascist scumbag this piece of shit Bannon is? And Trump sees fit to appoint him his chief strategist? One more reason why Donald Trump – whose name I will NEVER preface with the P word – is a gross malignancy, a creep of the first magnitude. As big a scumbag as Bannon and Ghouliani. 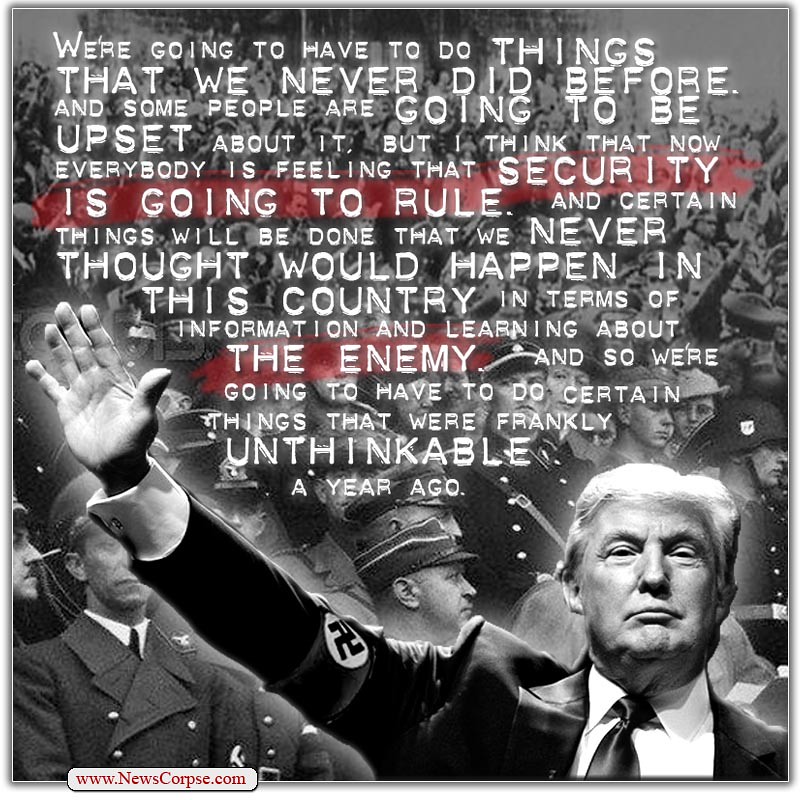 And, whether they are appointed or not, just the idea that names like these vermin are being bruited about: John (Let’s Bomb) Bolton, and Myron Ebell – a leading contrarian of the scientific consensus on global warming, who will lead Donald Trump’s transition team at the EPA (is this a bad joke?), and Jeff (an admitted racist) Sessions as possible AG, and – eeeww – Rudy Ghouliani, is a slap in the face of we, the people.

Also, the problem as I see it – besides letting all these cockroaches into the White House – is that it may take a little longer than the mid-terms  which will be in 2 years – for the terrible damage this Jackass* Trump – who lost the popular vote – and his moronic minions will have caused to be felt by the people who elected him.

I cannot overstate how much I despise Donald Trump, the Republican Party – and everything they stand for – and pretend to stand for.

*with apologies to the noble jackass.

Tony Powers is a writer/actor/musician. His full bio may be seen by clicking on the picture, and then clicking on either of the 2 boxes below it.
View all posts by barkinginthedark »
« EMAIL FROM THE ALT RIGHT
IMPEACH! NOW – OR ON JANUARY 21ST, 2017! »

4 thoughts on “WHAT A FUCKING NERVE! REDUX”