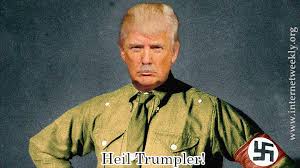 There is so much wrong with this criminal clown who will be sworn in as our “fearless leader” this coming January that one does not know where to begin.

Is it the unending amount of conflict of interest his vast global business empire will engender? Is it the blatant violation of the emolument clause? Is it the nepotism he is guilty of – according to a Federal law passed in 1967? Is it that he secretly conducted business in Communist Cuba during Fidel Castro’s presidency despite strict American trade bans that made such undertakings illegal? Is it that his early appointments and possible appointments include hiring a neo-Nazi advocate, an admitted racist for Attorney General, for his EPA transition an anti-science climate denier and an Islamophobe as National Security Advisor? You…Yeah you – Move along…Nothing to see here! I mean, hey – compared to a guy getting a fucking blow-job, these things aren’t reason enough to impeach…right?

This filthy orange scumbag is laughing in our faces. His family of leeches are rubbing their hands together at how much more money they’re going to rake in because their would-be dictator daddy has conned the morons of this country into voting for him.

And the filthy craven Republican Party will, under racist cockroach Jeff Sessions, hold hearings in their continued harassment of The Clinton Foundation? This, in the face of all the conflict of interest engendered by this fucking scummy Trump organization.

And, this merely scratches the surface of what a piece of shit this cancerous tumor, and his whole malignant family, is. They will destroy us if we let them!

LET’S ALL WAKE THE FUCK UP!  IMPEACH! NOW! SIGN ONE, OR ALL, OF THE PETITIONS BELOW!

Tony Powers is a writer/actor/musician. His full bio may be seen by clicking on the picture, and then clicking on either of the 2 boxes below it.
View all posts by barkinginthedark »
« WHAT A FUCKING NERVE! REDUX
THIS PIECE SAYS IT ALL FOR ME! »