I HAVE RESISTED SAYING THIS – HOWEVER, NOW I HAVE TO

While many others with the serious psychoanalytical expertise I do not possess have done so already I have long resisted the temptation to make a serious comparison between Donald Trump and Adolf Hitler, but I can no longer keep myself from doing so. However, this is less about the similar mechanisms by which both have ascended to power i.e. demonizing immigrants and attacking the free press, calling them “Lügenpresse” or “fake news” -  as well as any of the 20 similarities in this article by Burt Neuborne, one of America’s top civil liberties lawyers. And, be warned; today the extreme right in Germany has revived the term “lugenpresse.” I am more struck by the underlying pathology behind their actions. This is because I have been watching the Netflix series World War II in Colour, and I am struck by seeing actual footage of the irrational ego-driven actions of Adolf Hitler’s which graphically reinforce the contention that Donald Trump exhibits much of the same pathology as the Nazi leader. 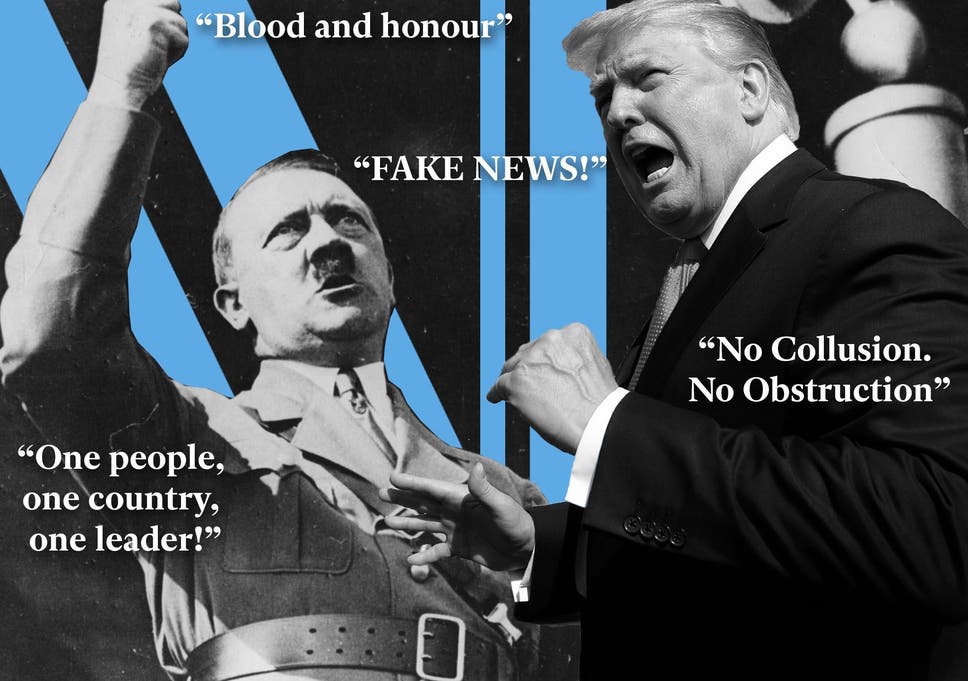 Hitler ignored the advice many of his generals against continuing to wage a war that was all but lost, insisting his Generals fight on even when outnumbered, short of supplies, and surrounded. He mistrusted his general staff and ignored their advice. Had Hitler bothered to heed the pleas of his Field Marshall the brilliant Erwin Rommel, the D-Day invasion may have been a full-on disaster for the Allies. Rommel wanted to position Germany’s elite Panzer tank divisions as close to the French coastline as possible to repel an infantry attack. Hitler disagreed, choosing to keep most of the Panzer divisions close to Paris. History has recorded this as a grave mistake. Hitler did this because he believed that he knew better than anyone how to wage the war. Sound familiar?

Much like Trump who bragged “I know more about ISIS than the generals do, believe me,” Hitler was convinced that he was a military genius. So confident was he of this that he ignored such inexorable military truths as the vast distances of Russia, the early and cruel winters, the lack of paved roads for his mechanized troops. Thus, his strategy prevailed over the more orthodox approach of Field Marshal Walther von Brauchitsch, the commander in chief of the offensive. As a result of his narcissism, his ego, his stubbornness, eventually 4.3 million Germans perished – not to mention the other 70 to 85 million innocent people whose death he brought about. Much like Donald Trump, who blames and denigrates groups who do not fit the imagination of a masculine, Christian, hard-working, and essentially white American ideal-type, Hitler thought the Russian soldiers inferior – they would be routed because they weren’t Aryans – and as a result his army was eventually slaughtered at Stalingrad.

There were many reasons for Hitler insistence on sending these soldiers to a horrible death in Stalingrad. Many of them illusions. One of them was because he hated Stalin, and this city bore Stalin’s name. Never mind that he was sending these troops to be massacred in the dead of the Russian winter. Hitler’s hatred for Stalin and his desire to erase the city that bore Stalin’s name was more important. The cost never entered the equation. He had to destroy this symbol of Stalin. To make matters worse, if that was possible, his decision to stay and fight was a crucial turning point in the war. This is the very same arrogant unwillingness to admit an error that Trump exhibits on an almost daily basis. Trump hates Obama as much as Hitler hated Stalin because Obama made fun of him. Imagine. That is reason enough in Trump’s tortured mind for his fixation on, and manic obsession with, erasing Obama’s name from the history books.

And now this insecure, grandiose monster in the White House who knows everything has, in effect, challenged a proud and mighty country to a war without consulting Congress. This, in direct violation of the Geneva Convention and several U.N. resolutions, while seemingly uncaring, or unconcerned, about the ramifications of this action. The two year old as leader has decided, in his stable genius-ness, that the consensus opinion of his predecessors George W. Bush and Barack Obama and their intelligence services which held that killing Iranian commander Qasem Soleimani would do more damage to the United States, and to the Middle East, than letting him live – was wrong. Because, like Hitler, he too knows better. Now, because of the actions of this unthinking, graceless, stupid monster inhabiting The White House we have created a martyr and galvanized an entire peoples against us for certain. And, if many of them did not hate us and wish us harm before you can be certain they do now. One of the gravest mistakes made by the Nazis during the invasion was the dispatch of S.S. execution squads to eliminate party functionaries. Their brutalities, as much as any factor, turned the people against the invaders and bolstered the partisan movement. As it happened then, you can now also be certain that the Iranian reprisals that come from Trump’s ignorant and willful act of mindless chest-thumping bravado will be severe.

Dr. Allen Frances, the former chairman of the Psychiatry Department at Duke University said on CNN “Trump is as destructive a person in this century as Hitler, Stalin, Mao in the last century. He may be responsible for many more million deaths than they were.” Whether he is right or wrong there are too many alarming parallels in the make-up of each of these men. I must add here that I do not believe Donald Trump is mentally ill, he is worse. The mentally ill do not know what they are doing, this con-man criminal does – and does not care as long as he, Donald J. Trump, is the center of the storm he is continually creating!

We have a cancer in our body. A malignant tumor that is spreading and will certainly destroy us unless it is cut out. And soon.

Tony Powers is a writer/actor/musician. His full bio may be seen by clicking on the picture, and then clicking on either of the 2 boxes below it.
View all posts by barkinginthedark »
« THE LAW!
ARE YA HAPPY NOW FAT DONNIE? »

6 thoughts on “I HAVE RESISTED SAYING THIS – HOWEVER, NOW I HAVE TO”