1. The art of talking for at least twenty minutes while looking sincere, sounding as if you know what you are talking about, and saying less than nothing. The art of shining shit.

2. Possessing the ability of being able to deny that you said anything you’re on record as previously saying. 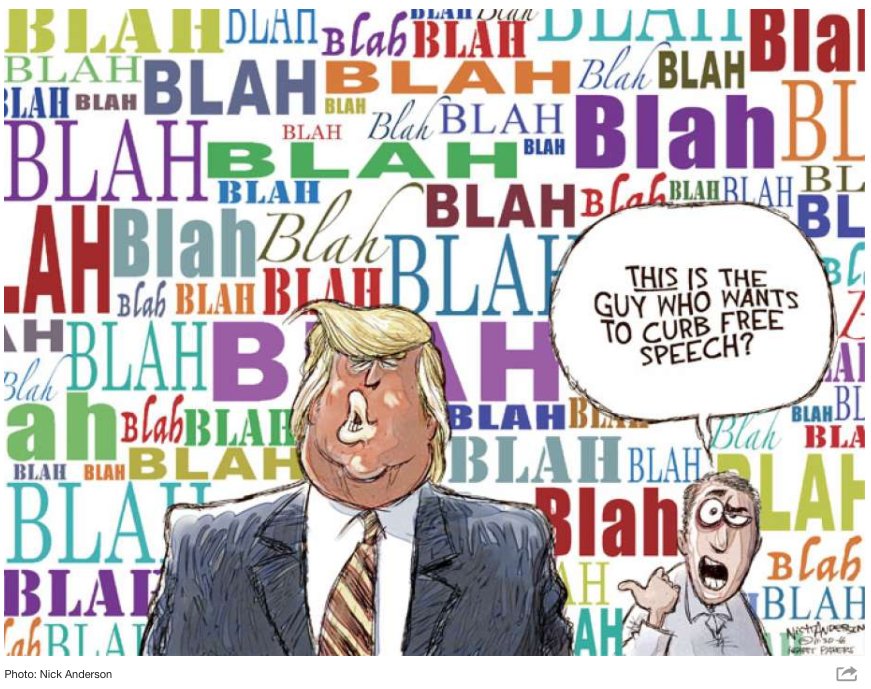 Trumpspeak is a language festooned with hyperbolic adjectives on steroids. Its essence is the shameless glaring absence of essence. It is pretty much the way we all bullshitted on essay questions in high school tests when we didn’t have the first clue to any of the answers. As far back as in grade school in the Bronx we used to joke that when you had to hand in a report on a book you were supposed to have enjoyed, but couldn’t be bothered to read, you could always fill it with sentences like; “the part I liked the most was when the ball rolled down the sewer.” It was bullshit but it sounded good. Before we ever knew of Trump we could speak Trumpspeak. 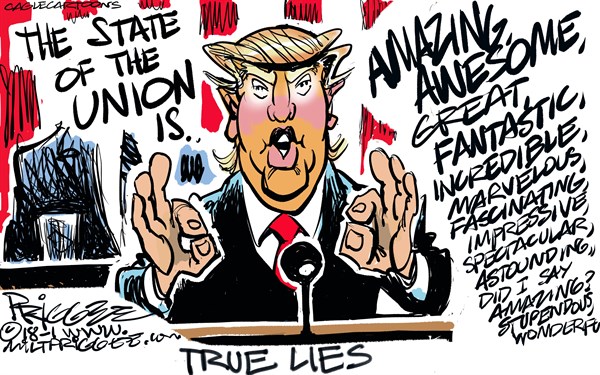 In Trumpspeak pretty much everything is a generality. In Trumpspeak hyperbole is king. Things are “incredible!” (Which means “difficult to believe” and, in Trump’s case, is therefore a perfect adjective to describe whatever words spew forth from what looks like a cowfish’s mouth.) People are doing a “terrific job!” They are “incredibly capable!” Most things, when they aren’t outright clear lies, are downright purposefully generic. They are “tremendous,” “absolutely great!” “The best!” “I’ve been told it’s the largest ever.” All of which are exemplars of grade A bona fide bullshit. And all accompanied by extravagant hand gestures which verify their provenance. Answers to questions are vamped, which is a musicians term for marking time by noodling on their instruments until the actual piece begins to take shape. Except with Trumpspeak it is all vamping, and nothing ever actually takes any shape. (Unless bullshit actually does have a shape and its shape is Trumpspeak.) Trying to extract anything close to concrete out of the stinkwind of Trumpspeak is the verbal equivalent of trying to breaststroke through lime Jell-o. 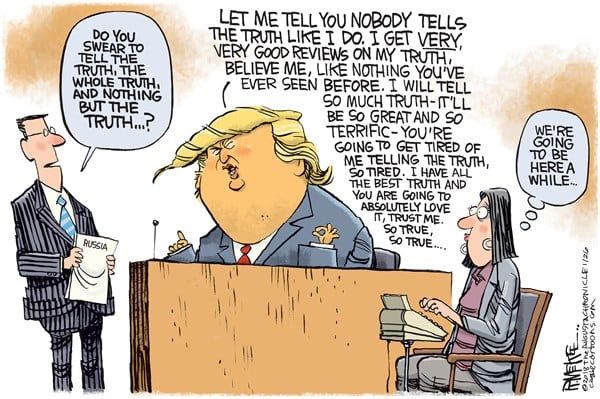 Trumpspeak is how people who don’t know what they are talking about string meaningless words together in an effort to try and appear as if they do know what they are talking about. You follow? It is an art form practiced by con men the world over. That glib guy who talked you into the shitty time-share you now can’t get out of? Trumpspeak. The soon to be ex-lover who said to you; “it’s not you, it’s me” and; “I know you’ll make some lucky person a fabulous partner because you are just the best?” Trumpspeak. Trumpspeak my friend, is that “friend” who told you that your performance was “really interesting.” And; “you made some really unbelievable choices.” 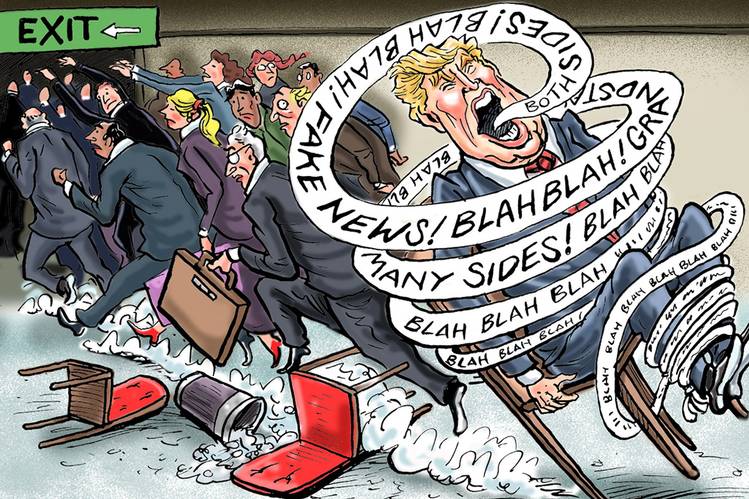 It is really striking that Jay Inslee, the admirable Governor of the state of Washington, can look straight into the camera and, off the top of his head, have a lengthy TV interview filled with fact based medical information about the Coronavirus, and know what he is talking about. Donald Trump, on the same subject, mechanically reads words off of a teleprompter and hasn’t a clue as to the meaning of what he is robotically regurgitating in that curiously annoying dead drone of his. Trump is at a decidedly painful disadvantage when forced to not employ Trumpspeak. Or, in other words, when he has to deal with those terribly pesky fucking things known as cold hard facts. Trumpspeak is bullshit spoke large. And with oily authority. It is the speech of Macbeth’s idiot; “full of sound and fury, signifying nothing.” 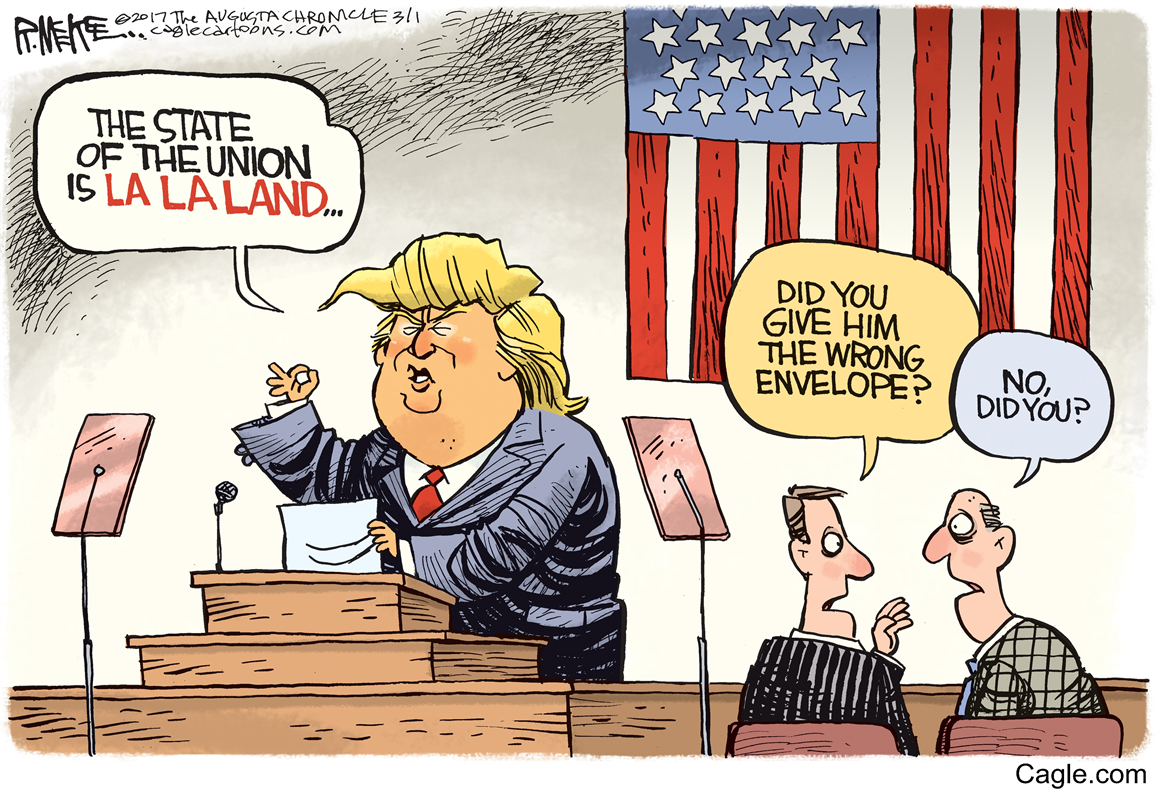 And not only is it sound and fury, signifying nothing, it is also usually all about what will be – not what is. In that way Trumpspeak is bullshit squared.

And isn’t it interesting – and fitting – that his degree from Wharton is a B.S.?

Tony Powers is a writer/actor/musician. His full bio may be seen by clicking on the picture, and then clicking on either of the 2 boxes below it.
View all posts by barkinginthedark »
« HERE’S YA KARMA, YOU FAT IGNORANT PIECE OF SHIT – OR; WHY I AM HOPING TRUMP AND HIS LACKEY CRIMINALS ALL CONTRACT COVID-19
MAKE THIS VIRAL; NEW YORK GOVERNOR ANDREW CUOMO MUST BE DRAFTED BY THE DEMOCRATS AS THEIR CANDIDATE FOR PRESIDENT »