THE FAMILY: THE SHADOW GROUP THAT RULES D.C. – AND US. NOW, MORE THAN EVER WE NEED TO BE AWARE OF THE FORCES ARRAYED AGAINST US.

Donald J. Trump is the perfect empty vessel. An amoral receptacle ready and eager to be filled with especially anti-democratic ideas. Ideas that cater to his lust for authoritarian power. And, like many others before him he is being carefully manipulated by certain members of Congress – and others in industry in positions of that power – who belong to a shadowy group of mostly Conservative Republicans known as “The Fellowship” or, “The Family.” 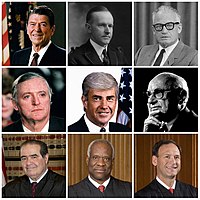 I urge you, and all who read this, to please watch the Netflix series called “The Family.” You will then understand how deeply rooted the problem that we face is in our attempt to maintain a Democracy. A Democracy in which the common people hold political power and favoring social equality. This group, The Family, with the blessings of their perverted idea of Christ, is devoted to an anti-Democratic ideal of governance. They see themselves as “the chosen.” The wolves. They see Donald Trump as “The Wolf King.” And they see us as the sheep. And, they are convinced that whatever they, the wolves, need to do in order to hold power over us, the sheep, is always in our best interests. 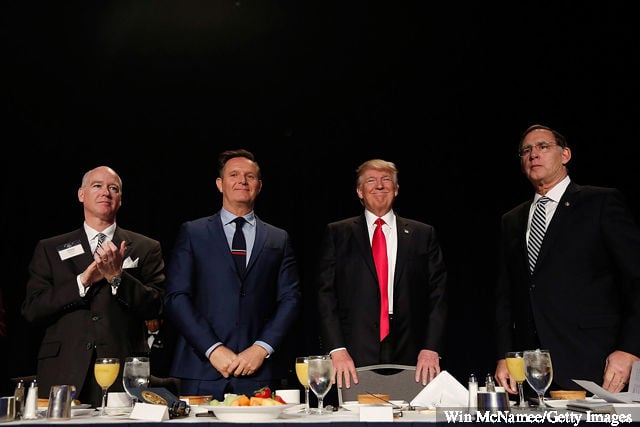 TRUMP AT THE 2017 NATIONAL PRAYER BREAKFAST

The Fellowship holds one regular public event each year, the National Prayer Breakfast, which is in Washington, D.C. Every sitting United States president since Dwight D. Eisenhower has participated in at least one National Prayer Breakfast during his term. If you you cherish Democracy and are not familiar with this eighty-five year old sub rosa group of ranking United States government officials, corporate executives, heads of religious and humanitarian aid organizations, and ambassadors and high-ranking politicians from across the world, you need to be. This is the group that controls Washington, and us. This is the group that excuses every action by one of their own – from the merely felonious to the obscenely heinous. As a group they are deeply anti-Democratic in the true sense of the word. 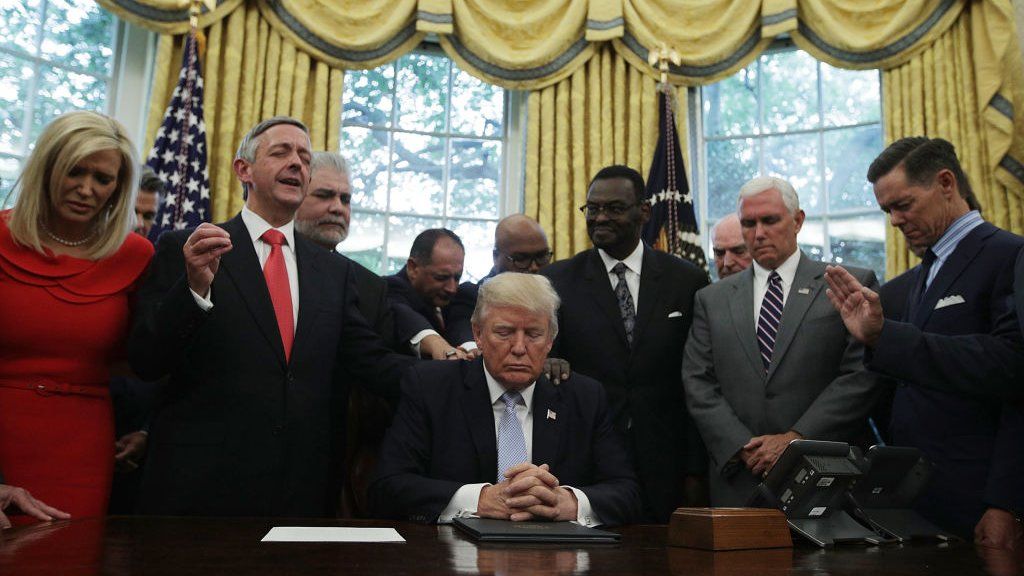 They are Fundamentalists – also in the truest of sense of the word. Fundamentalism is characterized by a strict belief in the literal interpretation of religious texts. The cabinet that Donald Trump has assembled is the most fundamentalist in America’s history. This explains this administration’s hostility towards science, and Trump’s stubborn refusal to act on the warnings he received about a looming pandemic which has now killed at least 113,900 people and counting. Oh, and destroyed our economy.

Their spiritual guide was a man much like the wizard of Oz; behind the curtain. And, in many pictures, can be seen standing behind the President whoever it is at the time.

Doug Coe was his name. Among other things, Coe asked his followers to “imagine pure power, as modeled by Hitler and other totalitarians” One video clip in the Netflix series is of a lecture given by Coe in 1989, in which he invites his audience to think about “Hitler, Goebbels, and Himmler.” The three men were so powerful because “they bound themselves together in an agreement. A covenant.” He can also be seen on video instructing; “imagine that power used for Christ, for good instead of evil. Jesus said, you got to put him before mother, father, brother, sister. Hitler, Lenin, Mao, that’s what they taught the kids. Mao even had the kids killing their own mother and father. But it wasn’t murder. It was for building the new nation. The new kingdom.” This was, and is, the incubator of so many of today’s Right-Wing Conservative leaders. 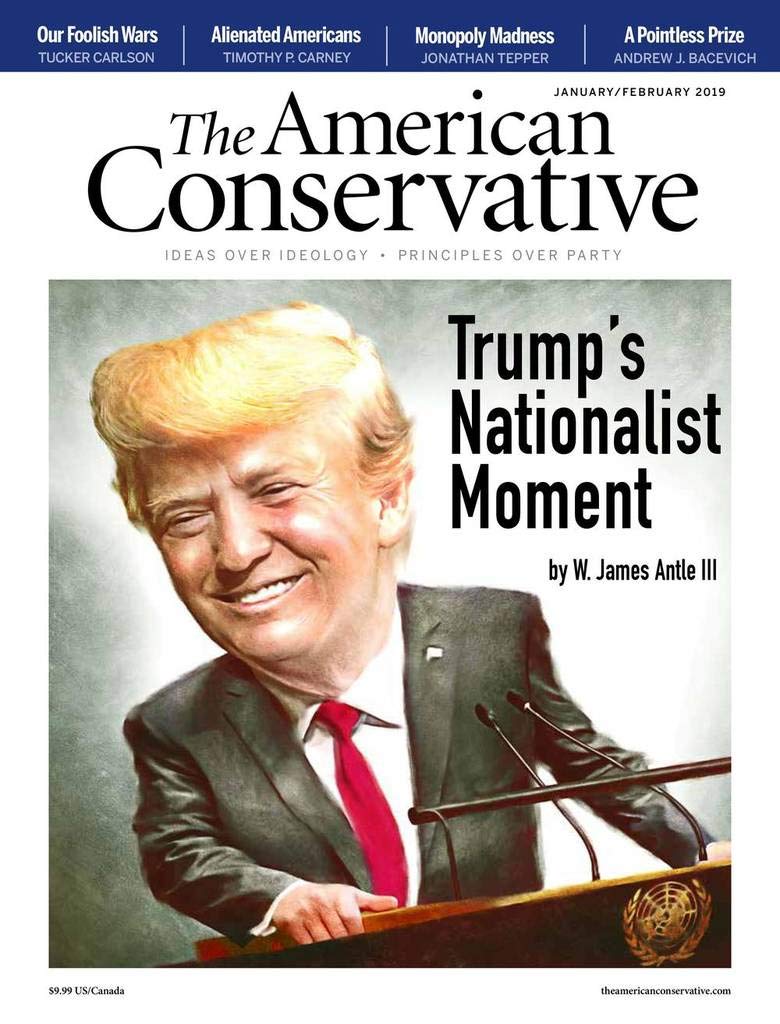 INTERESTINGLY, THE BOOK ON TOP, “ALIENATED AMERICA,” IS ONE THAT DEFENDS UNREGULATED SUPPORT OF FREE MARKET CAPITALISM.

Is it any wonder then that these people believe in their hearts that whatever they do is okay because it is only in the pursuit of “good.” Thus, supporting murderous regimes in Haiti and Indonesia and Somalia, supporting machete militias and “kill lists” and rape rooms which were/are all blessed by the Family’s faith and financed by its “leaders led by God” in Washington are all for “the good.” As is altruistically ridding us of those burdensome pesky protections known as “regulations.”

Thus, supporting someone as amoral and divisive as Donald J. Trump is for “the good.” 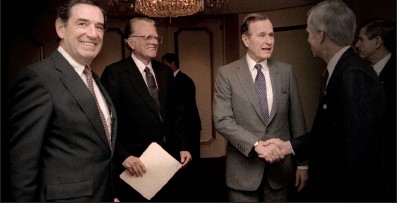 So, the Bible’s King David, who, in Doug Coe’s telling, “liked to do really, really bad things,” is to be revered. Why? Again, in Coe’s words; “Because he was chosen.” In the moral code of these people in The Family; anything you do in pursuit of a goal is to be excused because you have been “chosen.” And, make no mistake, the goal, no matter how these people shine it, is pure power.

Please, watch The Family on Netflix. And, if you can’t, then please check out the book, “The Family” by investigative journalist Jeff Sharlet, on which the Netflix series is based. 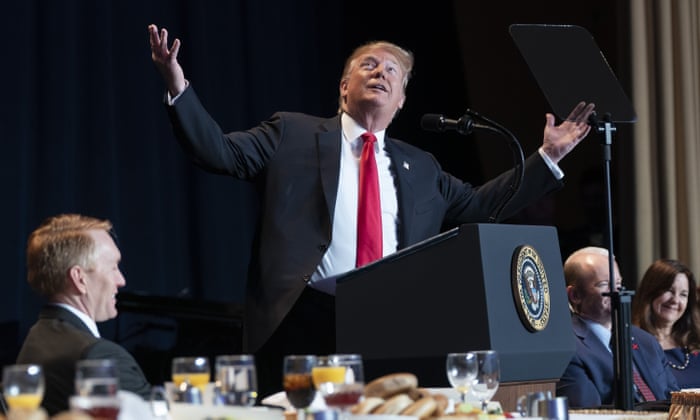 And, if you’re not yet convinced of how deep the anti-Democracy “religious” rot is, click on this.

There is only ONE solution, only ONE way to fight this; we MUST vote all Republicans OUT of office in November.

© tony powers and Barking in the Dark, 2020. Unauthorized use and/or duplication of this material without express and written permission from this site’s author and/or owner is strictly prohibited. Excerpts and links may be used, provided that full and clear credit is given to the authors of any of the cited material in this piece, and to tony powers and Barking in the Dark, with appropriate and specific direction to the original content.

Tony Powers is a writer/actor/musician. His full bio may be seen by clicking on the picture, and then clicking on either of the 2 boxes below it.
View all posts by barkinginthedark »
« THE MEPHISTIS
REMIND YOU OF ANYONE? »

12 thoughts on “THE FAMILY: THE SHADOW GROUP THAT RULES D.C. – AND US. NOW, MORE THAN EVER WE NEED TO BE AWARE OF THE FORCES ARRAYED AGAINST US.”