Sparks, NV 2/23/16 – In a hastily called press conference today Donald Trump made what he termed a “huge’ announcement. Speaking off-the-cuff and very forcefully he said; “I have carefully looked at all the possible running mates out there in The Republican Party and I have concluded that, by far, the most incredibly terrific ticket would be me for President and me for Vice President. Together with myself I would do great things and we would once again be an unbelievable country no one messes with. It would be incredibly fabulous and tremendous and also incredible, and you can take my word on this.

When one of the some fifty plus assembled press yelled out “that’s in direct violation of our Constitution and– he was cut off sharply by Trump who screamed “Get that man outa here! Now! Grab him by his neck and throw him outa here! Slam the door on him and if he gets his hand mangled in the door who cares? It’s his tough luck, and he deserves it! This is bigger than the Constitution – way bigger! We are now the laughing stock of the world because no one knows how to make a deal. No one except me that is, and my great best-selling book which proves this, The Art of the Deal, will be my blueprint to make America great again. Incidentally The Art of the Deal is $57.50 for the hard cover on Amazon, and I think, much like The Bible, every household should have one…it’s incredible and a tremendously invaluable work of art if I do say so myself. And you know, I don’t like to brag about my accomplishments but just let me say that I am the only man who can deal with that idiot Kim Jong Il – and I will get Mexico to pay for the wall…and gladly! And my book sells like hotcakes. 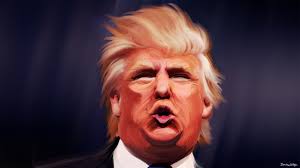 By the way, I like to joke about this huge unbelievable liar Ted Cruz and I am now referring to him as the Dart of the Eel. That’s great right? Art of the Deal – Dart of the Eel…what can I say…I’ve got a terrific sense of humor. We don’t want a President without a sense of humor right? Hey, when I’m right, I’m right.

But – getting back to me – because I know that’s why you’re all here, I think I would make an invaluable Vice-President to myself. I also think my incredible wife Melania would make a terrific Secretary of State. Right folks…right? I mean, who knows me better than me – and her. And she’s terrific and beautiful isn’t she? I’m right huh, am I right? I mean c’mon…So it would definitely work and we would be the greatest country in the world again because right now it’s unbelievable – we get taken advantage of constantly by these other countries and it’s incredible and I don’t like it. 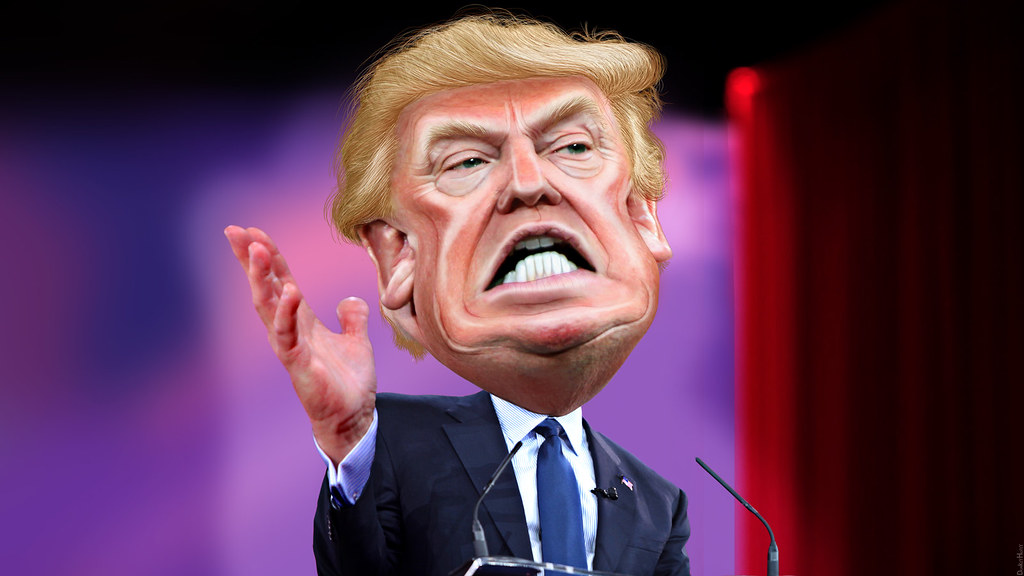 The Evangelicals…we love the Evangelicals! And we’re winning with them, and we’re winning with the educated and also the uneducated. We love the uneducated. And my fabulous wife wants me to tell you that the paperback The Art of the Deal is only $24.95 on Amazon. She’s great folks – right? She’d be an incredible Secretary of State…you just saw how unbelievable she is.

Hey – I’d like you all to meet my incredible son Donald Jr. who does such an amazing and terrific job running the Trump Hotel in Toronto. Don, come say a few words to all our fabulous supporters.” As Donald Trump Jr. strode to the podium Trump smiled broadly and gave the two thumbs up sign: “Hi everybody, and just I want to say how unbelievably incredibly terrific and great you all are. When my father is elected we will be terrific and great again – and you have my word on that.” He raised his hands in a victory salute and stood at his father’s side as Trump continued. “Thanks Don that was terrific…isn’t he terrific folks? Don’t answer that… we all know how unbelievably terrific he is. And handsome right? He looks just like me huh? Handsome! All my children are terrific and incredibly good looking. No surprise right?

It’s incredible what’s going on here – incredible.  This Obama has really destroyed this country we all love and–Another reporter yelled out “Aren’t you forgetting that President Obama inherited a mess caused by George W. Bush and Dick Cheney and–” Trump screamed: “STOMP ON THAT JERK AND GET HIM OUTA HERE! His bodyguards pulled the reporter out of his seat and dragged him up the aisle and threw him out the door. Trump smiled and said; “See? That’s what you get.” He continued: “You know I don’t like to brag but I know I can make America great again… great slogan right? I’m right, right? I will make deals left and right! I’ll deal with Little Kim over there in – what is it North or South Viet Nam?…Whichever, it doesn’t matter – I can handle him like I’ve handled all the other tycoons that I’ve beaten badly…badly!

And we all know that I really don’t like to bad mouth anyone or speak ill of anyone you know? But in this case I really have to make an exception…and I know you all understand and agree with me on this and you all know where I’m going with this right? This Ted Cruz…who, by the way, is a terrible liar, he was born in Canada. So he is ineligible to run for the Presidency and Marco Rubio, I’m not too sure he’s eligible to run either. It’s incredible that they’re both in this thing. But let them…even though they’re both ineligible to run – it doesn’t matter. I’m gonna destroy them. Am I right or am I right?

There’s also this really unfair flap going on in my unbelievably fabulous and terrific Hotel Trump Las Vegas – very unfair to me and, by the way, these people who are just a bunch of whiners, are incredibly well compensated for their work…what are they anyway? Culinary workers, bartenders? I mean it’s not like they’re auto workers at General Motors or something, right? So…let’s make America great again folks. And that starts with re-building our military – it will be so strong and so powerful and so great… that we’ll never have to use it. Nobody’s gonna mess with us. And, of course, building my wall is a biggie.

I’m a winner – that’s it…and, by the way, I don’t believe the Iowa results and neither should you. There are those that say I actually came in first, depending on how you want to count the votes, to be honest, because that was a horrible thing that took place. Horrible! Anyway, far be it from me to …I’m not a complainer. But it was terribly, terribly unfair to me – and you all know it. And, I’m not complaining but…

Thank you and may God bless you all……but not that jerk the Pope. Tony Powers is a writer/actor/musician. His full bio may be seen by clicking on the picture, and then clicking on either of the 2 boxes below it.
View all posts by barkinginthedark »
« THE BALLAD OF THE HATEFULLY OBSCENE RIGHT-WING OLIGARCHY or: WHAT DO YOU REALLY THINK DUDE?
TRUMP UNIVERSITY CURRICULUM – SPRING 2016 »