TRUMP HAS THEM FRANTIC OR: THE CHICKEN HAS LANDED

Were it not so tragic, the spectacle of the Republican establishment stumbling all over themselves to deny Donald Trump the top spot as their candidate for the President of The United States of America would be hilarious.

Trump, the natural spawn of the years of the Republican Party’s courting racists, placating religious lunatics, and using the culture wars as a political wedge, is the proverbial chicken come home to roost – and the GOP zookeepers (read; financiers) are frantic – because he is a chicken without a head.

The logo on the side of his private jet should be a wingnut – sitting on a piece of untethered runaway ordnance.

And, he is theirs.

And, as frantic as they may seem to be, we should not hold out any hope that his ascendance will cause this party to re-think any of their mean-spirited ways. To do so would be for them to deny the very nature of what is a good Republican. 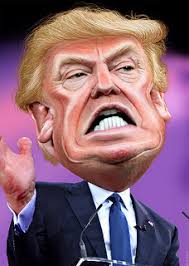 And speaking of what it means to be a “good” Republican; let us not forget that this is the party of the so-called “big tent.” So big that is has room for the likes of such political luminaries as the neo-Nazi David Duke, the paranoid Joe McCarthy who delighted in ruining people’s lives with his insane accusations that they were “communists,” Dick Cheney and George W. Bush who lied us into a war that killed 500,000 people, and Herbert Hoover and Warren G. Harding, who make everyone’s worst Presidents ever list.

Richard Nixon’s crimes in the early 1970s are legendary, as are the many Reagan-era scandals — Iran-Contra, criminal fiasco at H.U.D., the Savings & Loan debacle – of the 1980s. And as far as what’s in these people’s heads, there’s Jerry Falwell, who famously said: “Good Christians, like slaves and soldiers, ask no questions,” and Ronald Reagan who proudly said “Facts are stupid things,” and “Trees cause more pollution than automobiles,” and one Jon Hubbard an Arkansas Republican, in his book titled Letters to the Editor: Confessions of a Frustrated Conservative said, “…the institution of slavery that the black race has long believed to be an abomination upon its people may actually have been a blessing in disguise,” and “… If slavery were so God-awful, why didn’t Jesus or Paul condemn it, why was it in the Constitution and why wasn’t there a war before 1861?” and “…the immigration issue, both legal and illegal… will lead to planned wars or extermination. Although now this seems to be barbaric and uncivilized, it will at some point become as necessary as eating and breathing.”

This is the party that thinks stem cell research is an act against their God – unless one of their own may need some of that whatever it is.

This is the party that thinks the climate crisis is a “hoax.” Said that noted climatologist/scientist (wink) Republican Senator James Inhofe of Oklahoma, “The arrogance of people to think that we, human beings, would be able to change what He is doing in the climate is to me outrageous.” And, Climate change is impossible because “God’s still up there.”

From Bryan Fischer, a director at the American Family Association, a recognized hate group, comes this re fossil fuels: “God has buried those treasures there because he loves to see us find them.”

And, we must note this gem, from U.S. Rep. Republican Steve Scalise of Louisiana in reference to President Obama’s 2013 inauguration speech, “The President was wearing a trench coat it was so cold, but he’s talking about global warming.”

I could go on and on since the list of Republican boobs, criminals, homophobic gay-bashers, bigots, religious nuts, Islamophobes, immigrant bashers, hypocrites, Rush Limbaugh and science deniers is seemingly endless. You can google it. Big? This tent is enormous.

Granted, the Democratic Party has had its fair share of crooks and nuts as well. But, the party historically does not register as mean or uncaring towards the working and lower classes – no matter the transgressions of its members. A simple google search will reveal that The Republican Party down through the years has done virtually nothing for the working and lower classes of this country. The one site that claims the Party has done things to benefit these classes is – what a surprise – a Republican one.

But leave us now return to the surreal freak show that constitutes the current Republican Party – and its dilemma, a dilemma of their own making forged white-hot on the anvil of decades of hatred, stupidity, exclusion and good ol’ mean spiritedness towards all but the wealthiest among us.

That they are now in shock wondering how it is that a Donald J. Trump could actually be their standard bearer is just too juicy an irony to behold. Watching their contorted machinations and listening to the schemes their establishment is hatching – all aimed at getting rid of the “yuge” roach in their kitchen – is priceless. This is the man that this Party deserves. He is their very own Frankenstein monster – writ large.

I am willing to bet that the Republican Party changes little or nothing when this sad chapter in their history is over. Science has shown that it is the nature of the Conservative brain to fear nonexistent or overblown boogeymen  approaching a state of near permanent paranoia. The right-wing brain is governed by authoritarianism, dogmatism and an intolerance of ambiguity. That last, to put it another way, means a closed mind. Closed like a fist. One could even say that the Right-wing brain is clenched. Oh wait – what does science know?

As I stated previously, it is the very nature of Republicans that will keep them from growing from this harrowing experience. Oh, they will, no doubt, pay lip service to how different they will be in future, how this experience will have taught them an invaluable lesson, how this will engender a kindlier and gentler, more just GOP – yada, yada. yada.

But, for now they have Donald Trump. What could be more just than this?

Tony Powers is a writer/actor/musician. His full bio may be seen by clicking on the picture, and then clicking on either of the 2 boxes below it.
View all posts by barkinginthedark »
« TRUMP: GREATEST HITS & REVEALS PLANS FOR “MAJOR CHANGES IN WHITE HOUSE”
A TASTING OF TRUMP WINES »

4 thoughts on “TRUMP HAS THEM FRANTIC OR: THE CHICKEN HAS LANDED”