Donald Trump today defended his remarks to an attendee at The Central Wisconsin Convention and Expo Center in Rothschild, Wisconsin.

Mr. Trump was in the middle of his remarks when Timothy Rogers yelled from out of the crowd; ”My mother says you’re crazy.” According to witnesses Trump stopped his remarks, glared at Mr. Rogers, and shot back; “You’re crazy.”

What follows is the actual transcript of the back and forth taken from a nearby attendee’s cellphone. 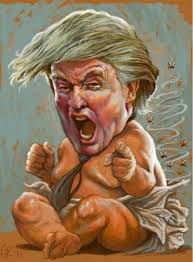 Trump: “And your mother is an idiot.”

Trump: “You think you’re so smart don’t you? You try doing this and helping our country become great again. I dare you. I double dare you!”

Trump: “Who is this wise guy? How did he get in here?”

Rogers: “And no one should believe a single word you say because you lie. You lie like a rug. My mother says you lie like that thing on your head.”

Trump: “This is my real hair smart guy. My real hair, Whaddayou know?”

Rogers: ‘I know that it looks like a bird’s nest.” 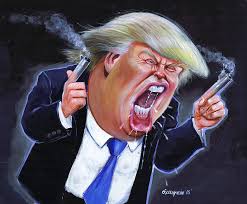 Rogers: “I’d really like to continue with this but we have to go.”

At that point Mr. Rogers left and Trump went back to his standard stump speech but not before saying; “That’s someone whose vote I would never want. He is another dumb Bernie loving idiot who thinks he’s so smart. He really thinks he’s so smart. I deal with his kind all the time. They’re no match for me. No match.”

Later, when reporters asked Trump why he would even engage in such a back and forth Trump said: “No one beats Donald Trump, No one!”

Another reporter asked: “Do you think that such a dialogue was Presidential? Especially in light of the fact that you were trading insults with a ten year old?” And to tell him he has buck teeth – why would you say that to a little boy? To which Trump responded with: “How was I supposed to know he was ten. I’m supposed to know that? Gimmee a break…you liberal media people have been out to get me since day one. Since day one you been out to get me.” 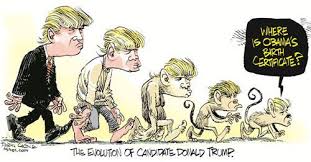 The reporter: “But he was what? Four feet tall and holding his mother’s hand? Why on earth would you even engage a little boy in such an infantile back and forth? And to say that you wouldn’t want his vote? He’s ten!”

Trump; “You know what? Get this bum outta here! Now! I don’t lose. Ever! I don’t care how old someone is! Trump doesn’t lose! No one gets the better of Trump! No one! That’s it – get him out and if he gets hurt it’s his tough luck. And I never said he had buck teeth. I’d never say such a thing. Never!”

The reporter was ejected and Trump continued: “This is why I will be a great President. Because I don’t take crap from anyone! And I never said the kid had buck teeth…believe me.”

A voice from out the crowd yelled: “But, you were arguing with a ten year old.”

To which Trump responded: So? So what’s your point? I shouldn’t? You’re a moron.”

He glared out into the crowd. “Folks – let’s make America great again. Make me your President and I will make us great again. Great again…Believe me, you have my word.”

He waved, made the two thumbs-up sign, and the crowd stood and cheered. 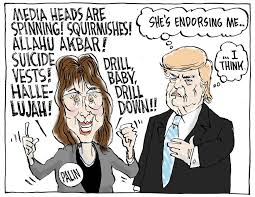 Tony Powers is a writer/actor/musician. His full bio may be seen by clicking on the picture, and then clicking on either of the 2 boxes below it.
View all posts by barkinginthedark »
« What the Hell is Wrong with Our Laws Today? More Email from the Tea Party
THE BALLAD OF “THE DONALD” or: BYE BYE MR. AMERICAN LIE »