Yeah…Donald Trump loves him some black fol– er…voters. And, he also hopes they are dumb enough to fall for his latest line of ugly bullshit about this new-found love for them. Actually, he must believe they are this dumb!

Any self-respecting person of color watching and hearing this speech yesterday had to be repulsed and infuriated by this blatantly arrogant, condescendingly insulting mockery of truth trotted out and put on display for all to see by the loathsome Trump and the equally loathsome Republican Party. If I were a person of color I would be at once insulted and enraged.

Donald Trump stood there today in Dimondale, Michigan, a town filled with white folks – when right down the road is a town that is primarily black – and spouted out this cynical bullshit about how much he’s going to do for the African American communities in this country. I – and I hope a lot of brothers all over the country – wanted to smash my fist through the TV screen straight into his stupid orange face. 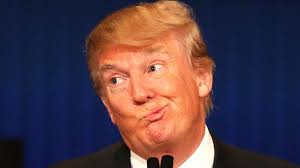 What a fucking nerve. This schmuck has no shame, no awareness of how disingenuous he is – how fucking phony he is. And, his all-white crowd of boobs, who have about one black friend total between them – cheered lustily at this charlatan’s surreal lies. This orange asshole and this cretinous political party just proved by this speech that they have so little regard for the Black community in this country as to actually believe that people of color would swallow this offensive pack of lies.

This jackass Trump must really actually believe that African Americans are going to now say; “the brutha Trump is for real…he loves the black man.” This contemptuous lying snake-oil salesman is the epitome of ugliness. 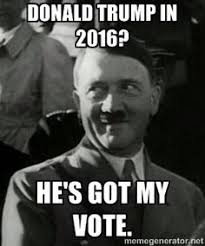 This piece of shit – who now LOVES the Blacks, this fraud who is now going to make everything alright for their community – previously turned down invitations to speak at The NAACP, the National Urban League, The National Association of Black Journalists, Black Pastoral groups and a host of Black business groups and entrepreneurs, most recently in Detroit. And, now that he is desperate, he is the Black man’s new best friend – and, even in light of his phony new love for African Americans, he STILL gave his bullshit talk in Michigan in a mostly white town to an audience of white morons – who all pretended to be so touched by their hero’s new-found epiphany. I am certain that even Trump couldn’t get up the colossal gall it would’ve taken to face a black audience and spout this crap.

This is the same person who told John R. O’Donnell, the former president of Trump Plaza Hotel & Casino, “I have black guys counting my money. … I hate it. The only guys I want counting my money are short guys that wear yarmulkes all day.” Trump, according to O’Donnell, went on to say; “Laziness is a trait in blacks. It really is, I believe that.”

Sadly, in Donald Trump’s case the answer is a resounding “no!

Tony Powers is a writer/actor/musician. His full bio may be seen by clicking on the picture, and then clicking on either of the 2 boxes below it.
View all posts by barkinginthedark »
« BELIEVE ME!
MEN WHO LOVE WOMEN »