I’M SCREAMING AT THE TV!

GET FUCKING SICK YOU FUCKING SCUMBAG MOTHERFUCKER! GET SICK AND DIE! YOU FUCKING LYING PIECE OF SHIT!  A DEAR FRIEND OF MINE PASSED AWAY TODAY – SACRIFICED ON THE ALTAR OF YOUR DESTRUCTIVE INSECURE NARCISSISM!

The clownish schmuck just came on for his daily spew of bullshit. I can not stand it anymore. I am filled with such rage at what this cocksucker is doing under the cover of a pandemic in which millions may yet die – and what he didn’t do to keep us all safer than we now are. The list of his failures is long and obscene, not the least of which was his cavalier dismissal of the warnings given to him that this could happen or his stupid firing of the pandemic response team in 2018 to cut costs. TO CUT COSTS!

GET SICK AND DIE YOU FUCKING PIECE OF SHIT! 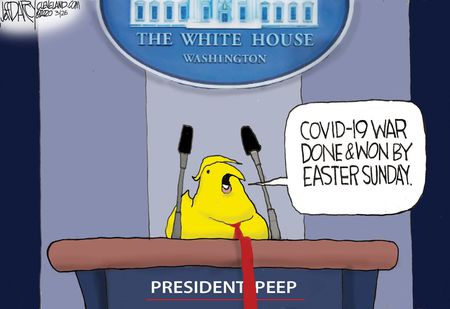 My brother, who’s in an assisted living home, would make a better President than this oaf. Trump has already puked forth in his dull dumb drone an amazing smorgasbord of lies, insults, and vapid happy talk while he adamantly refuses to do the ONE SINGLE THING HE ALONE CAN DO which is to insist that he and the federal government take over the procurement of all medical supplies necessary to fight this thing. Instead, this bloated coward passes the buck to the states. This is a ghoul who thinks nothing of playing politics in the face of a pandemic and whose entire foul life has been spent avoiding, and denying, any responsibility for his his bumbling mistakes and callous actions.

GET SICK AND DIE YOU CHICKENSHIT SCUMBAG!

He has just told us all his latest laughable lie: he never saw Peter Navarro’s January memo warning of the possibility of such a virus killing millions. We can believe he saw it and ignored it because even if hundreds of thousands died the stock market was more important for his re-election. His “image.” Then, to make an obscenity even worse, in February, as the crisis deepened, he was holding rallies for voters and parties for supporters, as well as golfing at his private club.

And now he’s telling us all how terrific he is, and what a terrific job he’s done. This, while telling us that he knows nothing about any of the situations he himself has exacerbated. “You’ll have to ask him.” “Speak to the Governor about that.” And, he’s touting a payroll tax cut yet! THE PAYROLL TAX IS THE MONEY THAT FINANCES SOCIAL SECURITY AND MEDICARE! This is what he casually proposes in the middle of a pandemic. Moreover, in the middle of a pandemic the Trump administration wants the federal courts to overturn the Affordable Care Act in its entirety, an escalation of its legal assault against the health care law. This would mean millions would lose their health insurance.

And, as he pushes for this, the Trump appointed Republican judges on the Supreme Court unanimously voted to block a federal court order that voters in Wisconsin should be able to vote absentee for six days beyond Tuesday’s primary election. They coldly did this despite the growing consensus, and plain common sense, that voting in the midst of a pandemic may be best done by mail. And despite the fact that this could lead to more deaths.

Tony Powers is a writer/actor/musician. His full bio may be seen by clicking on the picture, and then clicking on either of the 2 boxes below it.
View all posts by barkinginthedark »
« BEDLOE WAS SO RIGHT!
THE DIFFICULTY WITH REALITY OR; “WHAT THE HELL DO YOU HAVE TO LOSE?” »